Home > Protecting from Disasters > How safe is YOUR money in the bank?

How safe is YOUR money in the bank?

And how you can make it safer 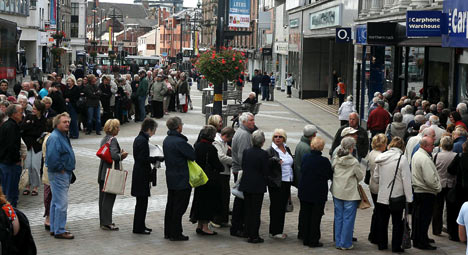 So, how safe is your money in the bank?

Ten years ago, this week, there were queues of people outside branches of Northern Rock Bank. People who were desperate to get their money out because they feared that the bank was insolvent.
This was the first run on a British bank since the 1860s (when a bank called “Overend & Gurney” failed)

Fortunately for Northern Rock’s depositors – all of their money was made ‘safe’ by the UK government and the bank was nationalized in February 2008.

Later that year (and on into 2009) various bail-out packages were arranged for Royal Bank of Scotland, Halifax Bank of Scotland (HBOS) and Lloyds TSB to reassure depositors that their money was safe in those banks too.

So where are we now?

Is another banking crisis on its way?

And if it is – how safe is YOUR money in the bank?

This Insight will explore the position for depositors in UK banks.

And to keep your holdings below YOUR protected limits.

How safe are UK banks

Well, the short answer is that no one really knows – not even the experts!

If you follow this subject, you will have seen the headlines in 2016 which questioned the stability of various European banks.

But you won’t have seen much troubling news about UK banks for some years.

And that’s largely because the Bank of England (BoE) has done a good (PR) job in promoting their regular ‘stress tests’ on the UK banking system.

Dig a little deeper and you’ll find that some financial experts are questioning whether these ‘tests’ by the BoE are really robust.

Kevin Dowd is a professor of finance and economics at Durham University Business School.  And he’s vigorously challenging the way the BoE measures the capital strength of our banks.

Our banking system is an accident waiting to happen, he says.

The executive summary of his latest report on the weakness of the BoE tests  ‘No Stress III’ could not be more damning.

Here are just some of his hard hitting statements:

“the stress tests demonstrate the opposite of what the Bank claims they do: they demonstrate that UK banks are still financially weak and far from resilient.”

“The conclusion that UK banks are weak is confirmed by banks’ market values being less than their book values. Low market values indicate problems with the banks that the stress tests did not pick up.”

“The Bank of England relied on unreliable metrics and its stress model produced implausibly low projected losses and so failed a basic reality check.”

“Regulatory stress testing is a highly imperfect tool with a track record of repeated failure in other countries.”

“In this sense, the stress tests are like a ship’s radar system that cannot detect an iceberg in plain view.”

“The stress test programme is therefore dangerous and should be scrapped.”

Dowd’s report was written for the Adam Smith Institute and, as with all questions around finance, economics and especially ‘risk’, it’s fair to say that not everyone agrees.

Other experts might argue that the Adam Smith Institute (a generally right wing think tank) gets a bit carried away with ‘free market’ thinking from time to time.

So, Dowd get’s a lot of challenges to his idea (not listed above) of forcing banks to mark their assets to market prices.

The challenge is that, in a crisis, this rule could make a bad situation worse. And some will argue that it’d be like forcing industrial companies to value all their plant and machinery at ‘fire sale’ prices. (if they had to do that – then most companies would most likely declare themselves insolvent immediately)

In any event, he’s got the attention of senior policy makers now.

And, according to this article in the Guardian, his report was explored by the Treasury select committee in January.

Since then, Dowd has met with officials at the Bank of England . . . although he’s not disclosed the details of their discussions.

I think it’s reasonable to assume that (for good reason) the BoE might not want publicity on any messages that reveal ‘frailties’ in our banking system.

And that’s why you need to limit your exposure to any banking group.

How much of your money is safe?

Well, you may have noticed that, since the financial crisis of 2008-09 the UK regulators have made all banks give clear warnings to their depositors about the limits of their protection.

Just walk into any high street bank and you’ll see the warning – probably right next to the service counter.

So, you really can’t miss it but in case you do (perhaps because you do all your banking online) then you will have received the warning letter in the post too.

This suggests, to me at least, that the regulators are getting us ready for the next crisis.

When the last one struck, very few people had a clue how much of their money was protected in the bank.

Next time we’ll have no excuse – and we should not assume that there’ll be more taxpayer funded bailouts to protect all bank deposits – regardless of amount.

So, we need to understand the limits and stay underneath them to protect our money.

If you’ve recently deposited large funds into a bank, you may enjoy a higher protection ceiling – but only for a period of time.

This rule takes account of the fact that – on a house sale for example – we might ‘temporarily’ find ourselves with large sums in one bank. So, we’re given a bit of time – but not much – to reallocate our funds across a number of different banks.

You can learn more about the ‘temporary high balances’ rules from the financial services compensation scheme here.

And remember, you only have a limited time to sort this out if your balances in any one banking group are over the safety limit.

You can also find more general information on the scope of bank deposit protection from the Financial Services Compensation Scheme here.

But here’s the key thing you need to know:

Which means that amounts in excess of the current £85,000 limit held across a ‘banking group’ are not covered.

What is a banking group?

For example, did you know that the Bank of Scotland group currently covers 8 different banks!

To find out if your bank(s) are part of a larger group go to this page at the Bank of England’s site.

No one knows when another banking crisis will strike.

Yes, some banks might be less fragile than others but the issue is more about the whole financial system which is highly interconnected.

On 9 August 2007, BNP Paribas froze three of their investment funds because they had no way to value the complex mortgage backed securities inside them.

That simple acknowledgement of the unknown risk inside their funds was, in many people’s eyes, the first domino (of many) that subsequently toppled in the banking sector.

The 9th August 2007 was, as Adam Applegarth (who was Northern Rock’s chief executive) later said,

“the day the world changed”

Or, as Larry Elliott, economics editor of the Guardian, said:

It marks the cut-off point between ‘an Edwardian summer’ of prosperity and tranquility and the trench warfare of the credit crunch . . .

. . . the failed banks, the petrified markets, the property markets blown to pieces by a shortage of credit”

The best informed opinion is that (unless there are radical changes to our banking system – to offer more protection from this network contagion type problem) there will be more crises in the future.

And they could strike at any time.

You will NOT get a warning.

So, please – and right now – make sure that you do NOT hold more than your protected amount in any one banking group.

Now, if you’d like a deep dive into the issues of the problems in the financial system – then try this

The real problem with banking today

And if, like me, you find Kevin Dowd’s honesty and hard hitting style to be breath of fresh air in finance then I have another treat for you.

In this Insight, I talk about another paper with Dowd’s name on it.

This time to shine a very bright light on the fact that Investment Bankers failed to understand the basics of investment risk.

It’s a brilliantly funny (and yet sad) proof of why you should NOT believe what many, so called, ‘experts’ tell you about investment risk.

Hope that was useful