Home > Advice to Avoid > The real problem with banking today

The real problem with banking today 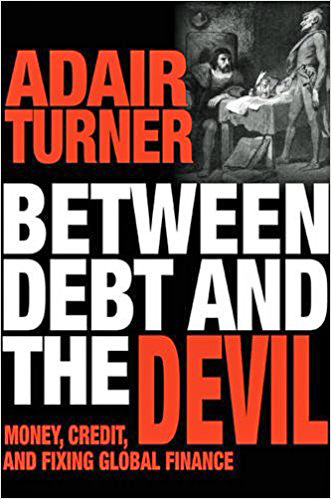 In this Insight, let’s look at the real problem with banking today

This should give us some context on those simple but flawed theories that have got us into so much trouble up to now.

Economics really is a massive subject and it has a lot of blind alleys.

So, it’s essential to listen to real experts if we’re going to explore it.

Okay but is it really an important subject?

Well it’s the economists who are behind what our politicians try to do. So, it’s useful to have a sense of whether they really know what they’re doing 😉

The video above is an excellent interview with Adair Turner

But if you’re in a hurry today – just read this excerpt from the interview.

This is from the end of the interview in which Turner makes it clear how our more recent ideas about economics are simply wrong.

These are really key ideas and it’s worth listening to the whole video if you have time – or reading his powerful book, “Between debt and the devil”

I think that we have to accept that we don’t know.

Hayek, talked about a fatal conceit in socialist planning. The conceit that it was possible to have such knowledge of present conditions and of the future that a mathematically optimizable system could produce maximum human welfare.

And he said the essence of the problem is that we are dealing with uncertainty and knowledge which is not known to all people.

I think the tragedy of modern rational expectations efficient market economics is that it also suffers from a fatal conceit.

A fatal conceit that through mathematics on the basis some sort of assumptions of rationality again we can arise at optimality.

Economics has to be about an exploration of human being’s interactions under conditions of uncertainty.

And that means that it will be a complex discipline where we can use some mathematics appropriately on some circumstances.

It’s probably more likely to be the mathematics which explores continuous disequilibrium.

But it also means that our economics has to be informed by economic history, by narrative accounts of how people interact in the real world. Because there are some things about the real world which you can’t describe in mathematics – you have to use linguistics to do it.

And it means also that it should include the history of economic thought. Because that history reminds us that these issues are incredibly complicated and difficult.

And it reminds us that we’ve gone through some very different belief systems in the past and that probably tells us that we will never arrive at complete answers.

Now I’ve found it quite startling dealing with younger economists to find that almost none of them these days read early Milton Friedman or Keynes and the general theory or Knut Wicksell or Hayek, or Hawtrey or Bagehot or Minsky now.

And we need them to do that because if they do that they will be encouraged to have a richer form of economics which is more likely to understand the world as it really is rather than as we have assumed it to be.