Home > Achieving more > Let’s hear it for the quiet folk

Let’s hear it for the quiet folk

after all, they tend to add the most value 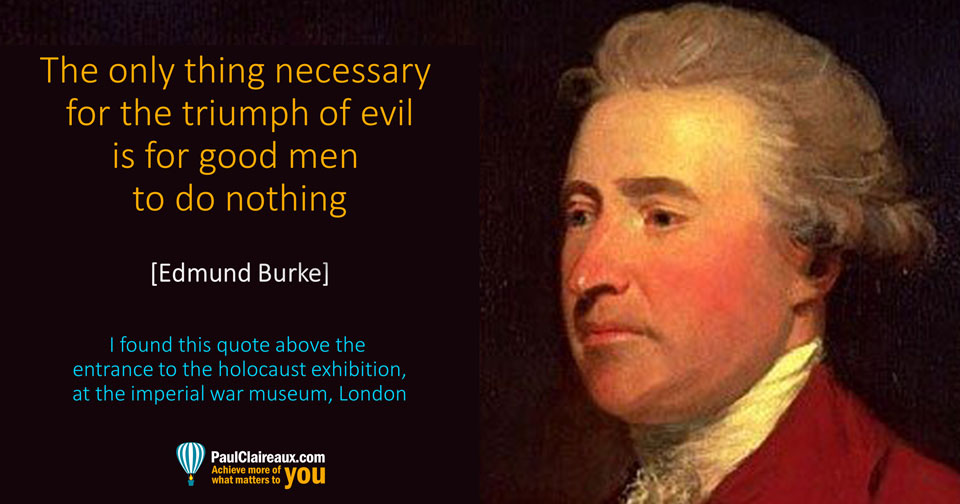 I came to the conclusion, many years ago, that we should listen harder to quiet folk. And here I’d like to explain why.

Incidentally, the quote, in the image above, can be seen at the Imperial War Museum in London… above the entrance to the Holocaust exhibition.

It’s one of the most powerful quotations of modern times, and, most surely, helps us to understand the passive behaviour that sits behind many of the world’s humanitarian disasters.

The quote was attributed to Edmund Burke, an 18th-century British politician, by John F. Kennedy. The originator’s identity is disputed amongst academics, but the message remains a powerful one.

We must hope that we do not face that sort of atrocity again but should recognise that support for hate-based tribal factions – whether based on religious belief, skin colour or geographical origin – remains a feature of our world today.

When one group decides to hate another, they lose sight of that group as containing individual human beings. They forget that we’re all just people, with the same sorts of hopes for ourselves and our families as each other.

The idea that any group of people are all ‘bad’ is mad and a recipe for violence. And, sadly, it’s too often only when the blood is spilt that we realise … we’re all made of the same stuff.

The better way is obvious

There can be no question that it’s better to deal with our issues peacefully and by speaking up against specific behaviours.

What on earth is the point of ‘bad-mouthing’ whole groups or communities as some lunatic politicians do?

You might think that the noisy hate tribes are becoming the mainstream of our society but I don’t. I think that’s more of an illusion caused by too many reasonable people keeping too quiet.

That said, there are certainly too many ‘noisy non-thinkers’ in positions of power. And, as Susan Cain says, in her book ‘Quiet: The power of introverts in a world that can’t stop talking’, “it’s the extroverts who’ve taken over the western world.”

If you’ve not seen this yet – take a few minutes out to watch it. Cain is quite brilliant here.

From personal experience, in the banking and financial services sector, I’m inclined to agree with Cain.

Shyness, sensitivity, seriousness and realism are often seen as weaknesses. And introverts may feel reproached for being the way they are.

‘Blind optimism’, on the other hand, seems to be a highly valued personality trait in some organisations!

Our labels about personality and mood mislead us

As Cain says, ‘There’s zero correlation between being the best talker and having the best ideas.’

I’d go further – a lot further than that – and suggest that the correlation might even be negative.

In other words, that the best ideas tend to come from the quietest people and that the most stupid ideas come from the noisiest – although I have no data to prove this 😉

A very short but funny story

A particularly bright ex-colleague of mine very seldom had much to say in our work meetings, and I once asked him (privately) why this was so.

“Oh that’s easy”, he said, “I see no reason to prolong the pain of those meetings any longer than necessary…

(A quiet and bright guy – with a great sense of humour. I’ve found that those attributes often go hand in hand)

Perhaps the lesson here, for the noisy ones amongst us, is to shut up and listen occasionally!

We might benefit from the humour, insights and incisive questions of our quieter friends and colleagues.

There are also some massive benefits to be had – even for those in sales jobs where, you might think, you need to be noisy and extrovert.

You don’t, I as outlined here.

Interestingly, Susan Cain, an introvert herself, used to run a business that trained people in negotiation and communication skills.

The value of asking simple honest questions was a key part of her message, and her clients included investment banks and other firms in the financial sector – so perhaps that industry became open to learning after the last financial crisis…

… but I’m not convinced that it retained that interest or that it’s very widespread. And I still see a lot of evidence of brash, risky and very sales oriented behaviour that has little or no respect for the truth.

To my mind, the quiet and thoughtful personality types are, in many contexts, more useful than the noisy and quick-acting types. And we certainly don’t need the machismo style of management in banking or any other industry do we?

So let’s hear it for the quiet and reasonable people around the world!

And let’s encourage them to speak up against the extreme views being touted – from any side.

For example – we have a lot of different religious and ethnic groups across Britain – but I’m confident that we all pretty much agree on some fundamental human values of care for each other.

So let’s speak up about that too – and drown out the noise from the hate-tribes.