Home > Advice to Avoid > How should you split the bar bill?

How should you split the bar bill?

well, don't do it this way! 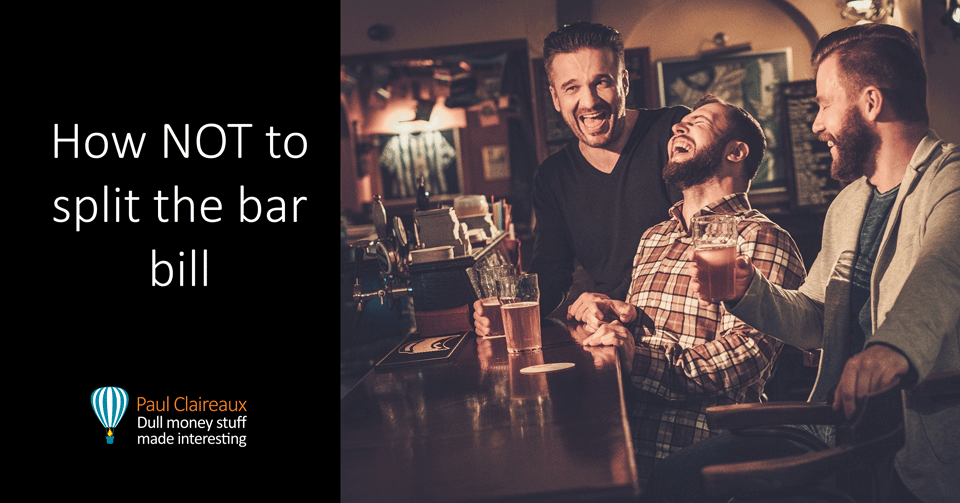 In this classic funny story, we learn the limits of Socialism.

Every week, ten men used to go out for beer and, fortunately for this story, the bill always came to £100.

Now, these guys had agreed to pay the bill in the same way we pay our taxes.

They had gone out for drinks, in the same bar every week for months  – and were perfectly happy with the arrangement.

Then, one day the bar owner caused them a problem.

“Since you are all such good customers,” he said,

So, the drinks for the ten men would now cost just £80.

Dealing with the windfall

Of course, these guys wanted to maintain fairness in the group, and continue paying their bills in the same way we pay our taxes.

So, they started to work out the new ‘fair’ shares.

Initially, they thought that they’d just leave the first four men as they were – paying nothing …

… and then divide the £20 windfall evenly between the rest.

But then they noticed that this would result in the fifth and sixth man being paid to drink their beer … and that didn’t seem right!

So, the bar owner suggested another method.

‘Look guys’, he said, ‘you’re making this too complicated. Why not just reduce each man’s bill by a percentage amount rather than a fixed amount of money. And, as you all want a ‘fair’ system, use a progressive system and give the biggest percentage savings to the poorest”

… let’s have another round barman, you’re a genius”

So, the new bar bill payment system was agreed and now:

So, each of the last six was better off than before whilst the first four continued to drink for free.

What could be fairer than that?

Unfortunately, once outside the bar, the men had second thoughts about their savings.

“Yeah, that’s right,” exclaimed the fifth man. “I also only saved a £1. It’s unfair that he got ten times more benefit than me!”

The wealthy get all the breaks!”

“Wait a minute,” yelled the first four men in unison …

“We didn’t get anything at all. This new system exploits the poor!”

So, the nine men turned on the tenth and beat him up!

The next week, guess what… the tenth man didn’t show up for drinks.

So, the other nine sat down and had their beers without him.

Of course, when it came time to pay the bill, they discovered a problem …

They didn’t have enough money between them to pay the bill.

Indeed, they didn’t have enough money to pay even half of the bill!

Funny as it might seem, this is exactly how so-called ‘progressive’ tax systems work when you take them too far.

The people who already pay the highest taxes will naturally (and rightly) get the most benefit from a tax reduction.

There are, of course, some confused people who believe that these guys would be right to complain about the 10th guy enjoying a decent fair share in the windfall.

Which is kinda dumb when you consider he was paying most of the bill.

The far leftists (and more than a few champagne socialists) might also tell you that folk on middle and higher incomes … should be ‘given’ less tax relief – on their pension savings for example.

But let’s just stop and think about that statement for one second.

If you believe that you’re ‘given’ tax relief, it implies that your income belongs to the government.

Of course, it’s exactly those tax-free ‘allowances’ that are under attack (for middle income and higher earners) by various means.

But any reasonable person can see – this is all wrong.

Your income is yours

Yes, we all need to pay our ‘fair share’ of tax (and on various things) to fund good public services.

But when a tax is not payable by anyone on certain activities (like pension saving – to encourage us to save for old age) the government should absolutely NOT then distort the system by taxing your tax-free allowance away with various complex ‘tapering’ arrangements.

It’s like beating up that guy despite the fact that he was still paying more than 60% of the beer bill – after the adjustment!

So, WTF is the point of beating them up?

UK governments let this issue get out of control in certain areas, and until recently there were quite a lot of Doctors paying marginal rate tax of more than 100% on their earnings.

Yes, seriously – ask a senior hospital consultant about it.

And that resulted in a lot of doctors cutting back on vital work – and many leaving the country altogether.

Some think it’s OK to take the piss out of middle-class professional people and attack them for being wealthy.

There are plenty of places where they (and engineers and other scientists) can go to work (and drink) overseas … and where the atmosphere is somewhat friendlier.

So let’s take care of our professionals and keep them here hey?

PS I’ve re-written the story above from one I found many years ago – and discovered again today on the Moore Stephens Website here.

I’m not sure who the original author is but I’m very happy to give credit if someone can tell me.

You can sign up to my newsletter here, and, as a thank you, I’ll send you my ‘5 Steps for planning your Financial Freedom’ and the first chapter of my book, ‘Who misleads you about money?’