Home > Advice to Avoid > What is the true cost of a pension?

and why might it be LESS than 'some' experts tell you? 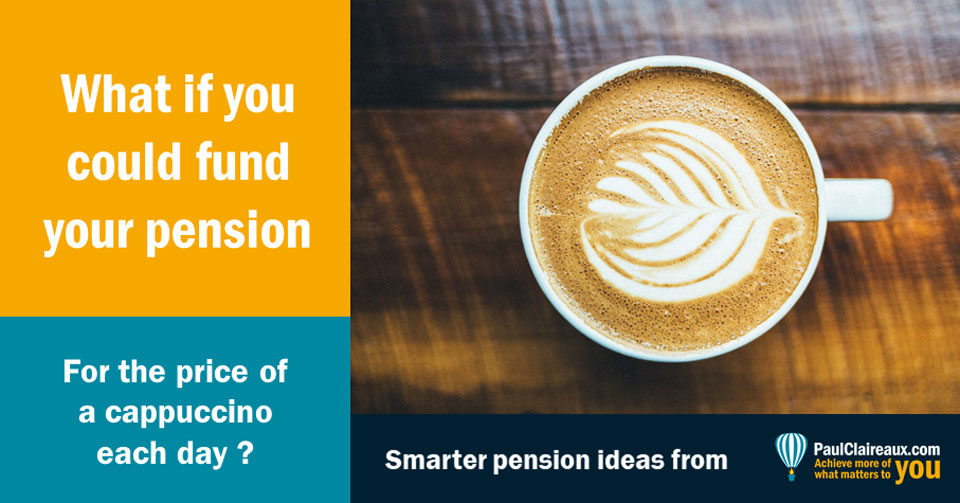 So what is the true cost of a pension?

So, let’s see how the Press and others might, inadvertently, mislead us about pensions… and ask if this might be one reason why some people don’t bother saving anything at all 🙁

This issue affects millions of people

So, if this is useful to you – or could help a friend or family member – please hit a share button on this page. I honestly believe they’ll thank you for it 🙂

Now, I’ve observed the Pensions and Investment industry (from the inside and out) for more than 30 years now… and, sadly, there aren’t many in the media who can help you to navigate it.

Sure, there are lots of journalists who can grab people’s attention with a ‘scary’ headline… or engage them with a good story. And they even have a formula for doing just that.

What makes a strong news story?

Well, perhaps you’ve noticed… that the stories in the papers (or leading online journals – or mainstream TV) normally have one or more of these characteristics:

What worries me – is that their obsession with scary or odd stories is having a very bad effect on the long term wealth of the nation. And that’s a serious issue because you really need to understand your money to make better decisions about it.

Poor quality or Misleading information can cost you tens or hundreds of thousands of pounds over the long term. And my aim with this site is to help you steer a path through all this noise… with solid ideas to help you build your wealth.

The typical silly pensions story in the press

To be clear, these are just 2 of many examples of this story – taken from good quality media outlets – the BBC and the FT.

Obviously, the ‘lesser’ quality newspapers and media outlets get this stuff wrong too; just as often and just as badly – if not more so.

Indeed, in my experience, very few consistently get their facts right or the stories balanced when it comes to pension planning. So please take their stories with a ‘pinch of salt’ 🙂

Can you imagine seeing this headline?

and ends up with a decent pension

We’re not going to see that one because it’s a useless headline or News story… it’s just a boringly good outcome for John!

So, you will NOT find that story in the press – and you’re left to decipher the facts from the fantasy in the more shocking stories you’ll normally find.

In March 2016 the BBC ran a story with the headline:

And they went on to say, ‘The Independent Review of Retirement Income (IRRI) suggests the target for savings should be 15% of salary – a considerably higher level than has been suggested previously.

Then in July 2017, we got the following headline in the FT to tell us that even YOUNG Britons need to save a phenomenal amount for their pension! 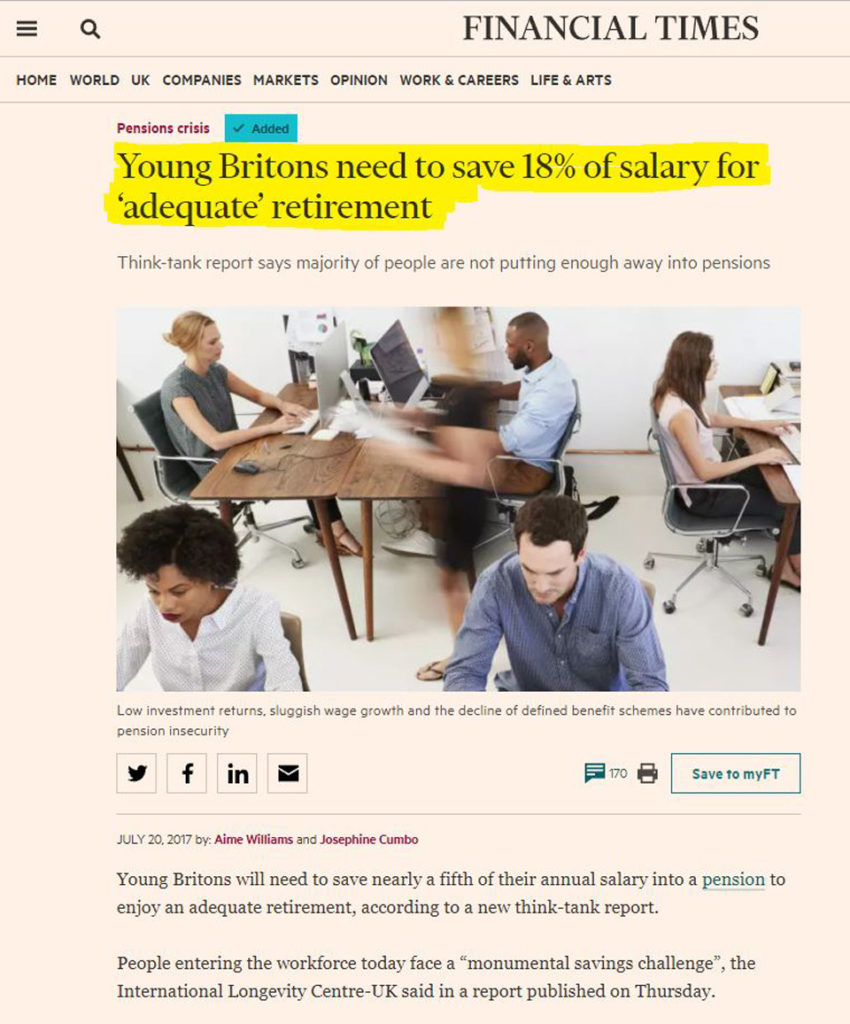 The question is – are they right?

This is news from the BBC and the FT after all 🙂

Well, no, of course not.

18% might be just the right amount for a small number of people with particular circumstances. But it’s a useless guide for everyone else.

Some older people, like those who’ve left their retirement saving very late, might need to save a lot more than that. And the alternative for some will be to carry on working – to a ripe old age.

On the other hand, as we’ll see below – a lot of younger people might not need to save nearly as much as that – in order to achieve their financial goals.

So, like most complex questions, the answer to the ‘cost of a pension’ question, depends on your situation – and on the assumptions you make about the future.

‘One Size’ most certainly does not fit all.

There is no Newspaper or Online Blog in the world that can tell you how much YOU need to save for your own particular goal whether it’s retirement or anything else.

And yes, that includes this blog too 🙂

The only possible exception to this rule is if:

Unless you do that then no one can work out your numbers for you.

So please let’s not pretend…

… that they have the answers to this thorny question.

Although if you have a group of people (employees or friends) and would like them to learn how to work these numbers out for themselves – I might be able to help with some education around a planning process.

Now for the silliest story, I’ve seen on pensions

So, this one – sorry guys – actually appeared in one of my preferred papers (the Financial Times) a while ago – on 12 February 2016. 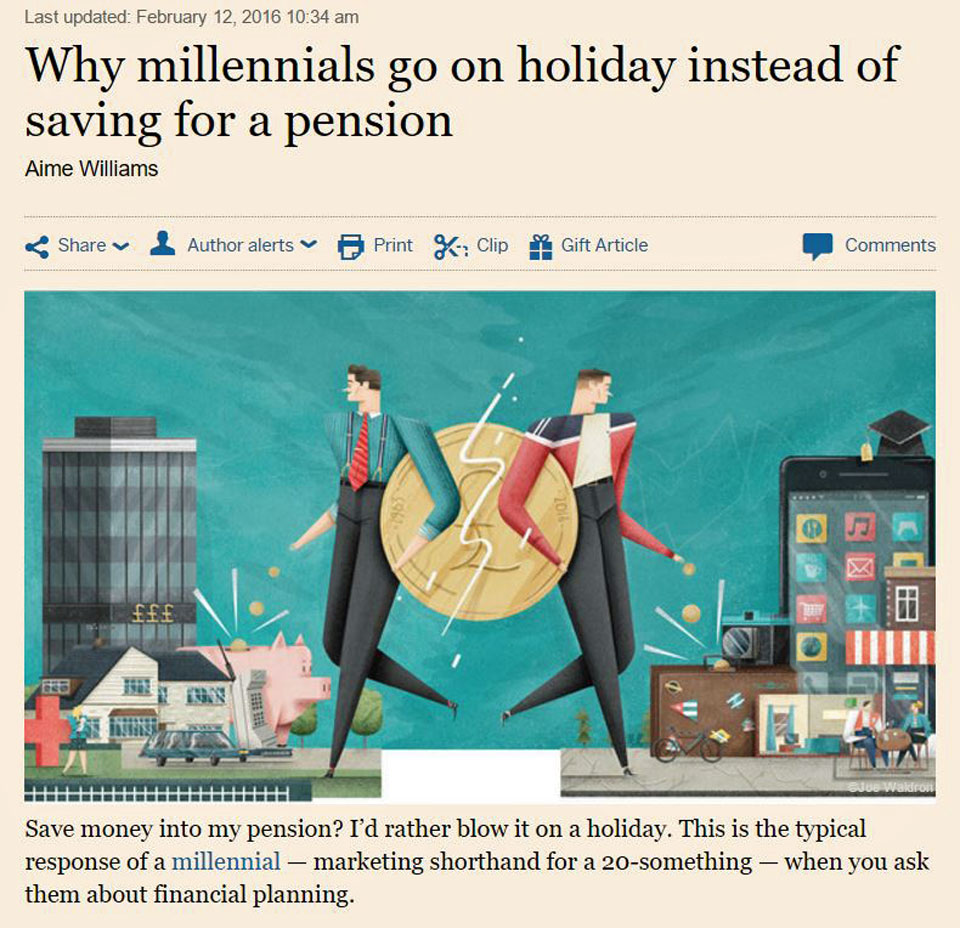 The article went on to say:

Now, just in case you’re as shocked as me – when I read that – let’s read it again and spell out the key points:

When I saw that, I wondered what planet the FT was on… but then I remembered… that they too, sometimes spend a bit of time on the planet ‘shock horror story’ 🙂

And, from their perspective, they were successful too – because that article went ‘viral’ ... and ‘going viral’ is a very rare event for an FT article – especially one on pensions 😉

That said, it’s hardly surprising that it went ‘viral’ with that shocking (£800 p.m. cost) guidance, is it?

What astonished me was that to build on their “success”, the FT ran another story (the following week) congratulating themselves on the interest they’d generated with this ‘shock’ story.

This was my favourite 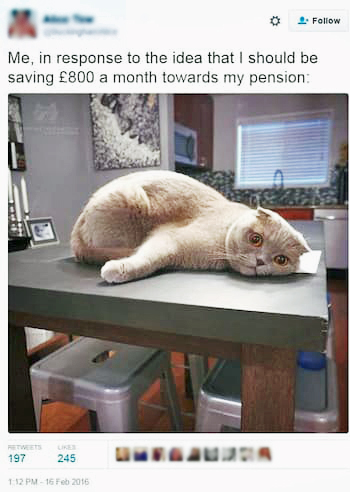 Well, yes, it is funny but it’s also very sad 🙁

And that’s because it proves how these ‘shocking’ pension articles put people off doing what they need to – which is to save for their later years.

So what’s to be done about this?

Well, I offered the FT my services at the time – to write a more balanced article on the true cost of a pension. But, as of today… I’m still waiting to hear back on that  😉

So, in the meantime

Here’s what 25-year-olds should know on pension costs

Your starting personal net cost to fund that modest pension could be as low as:

What’s more, if you’re employed (as compared to being self-employed) and your employer matches your contribution to a pension, then your starting cost would be halved.

… and that’s the same as one very nice coffee a day! 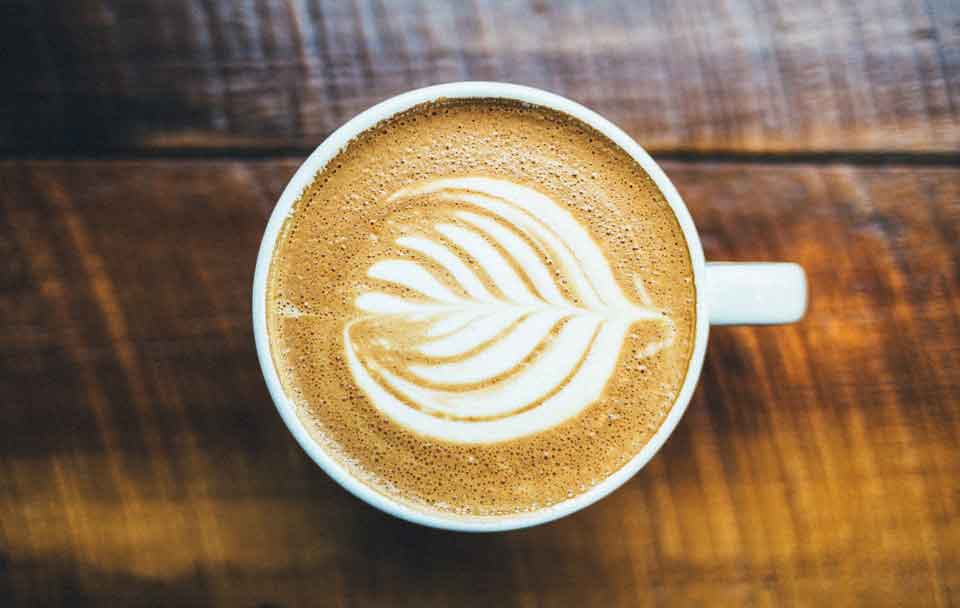 Well, bear in mind that the government will (normally) add tax relief to your personal input to pensions – and this £3 a day example assumes your employer matches your input. I’ve also made some reasonably optimistic assumptions.

Your estimate of what you need to save – for the long term – depends heavily on the assumptions you use to work out your numbers.

And the longer the term (40 years in this example) the more the results are affected by small tweaks in these assumptions.

So, let’s look at how your ‘estimated costs’ could vary – if we tweak these numbers. For example:

To learn more about my assumptions – see further down this page.

What if that amount looks unaffordable, even on my optimistic assumptions.

Well, perhaps you could target a pension of £20,000 p.a. for now, instead. And your personal (net) starting savings cost (for that) might be as little as £60 per month (£2 per day)… if you’re happy with optimistic assumptions – and your employer pays half.

And that’s a much cheerier headline – don’t you think?

In defence of the journalists

Now, you might wonder why journalists publish stories so often – about how pensions are absurdly unaffordable?

They certainly do like a good ‘shocking’ story … but it’s not just for that reason.

You see, the journalists get their numbers from cautious financial advisers and other ‘experts’ … and it’s these experts who (in some ways, understandably) are fearful of getting into trouble with their financial regulator – if they’re thought to be:

So, financial advisers tend to assume that everyone saving for a pension is going to want a Rolls Royce version. And they kinda forget the fact that most people can’t afford that kind of car! 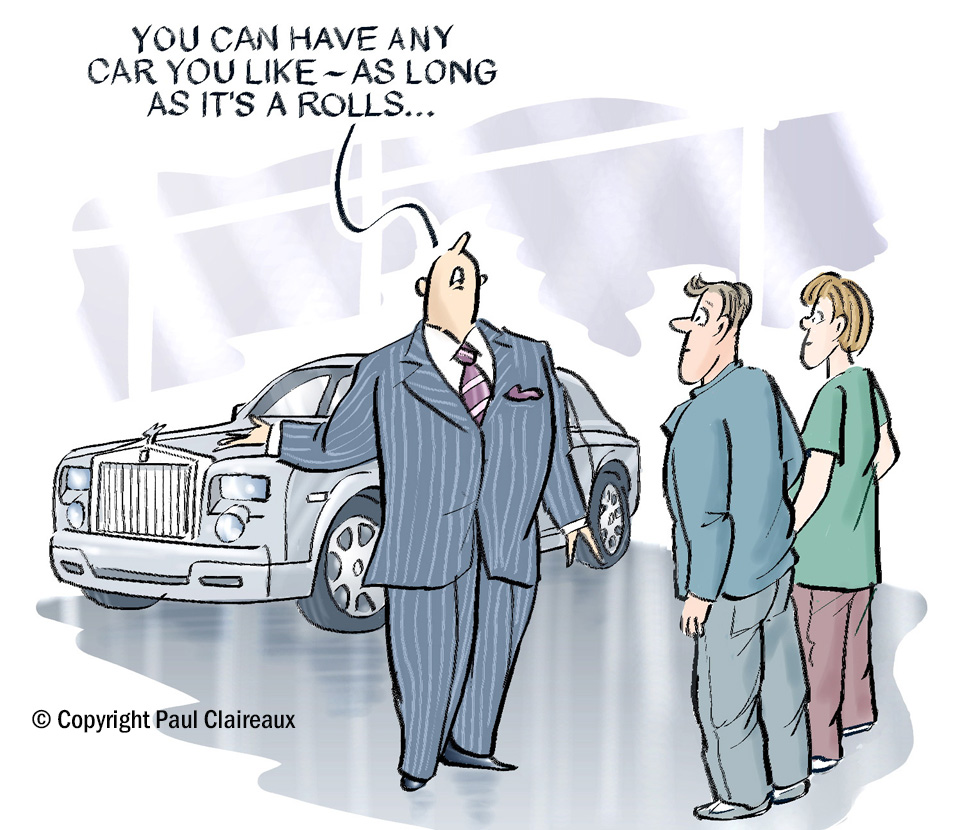 The true cost of a modest pension (for YOU personally – and on top of the state pension) may be higher or lower than the example numbers we’ve looked at here.

However, the essential point to learn here is that building a modest pension (if you start when you’re young) is NOT an impossible dream. It’s actually quite achievable for most.

The challenge gets bigger – and much, much bigger – if you reach your 40s and 50s without any savings. And people in that situation can easily be tempted to take big risks with their money – in an attempt to catch up with those taking the gentle savings approach.

Note the climbers in this image whose risky late climb plan might work – but only if they’re lucky! 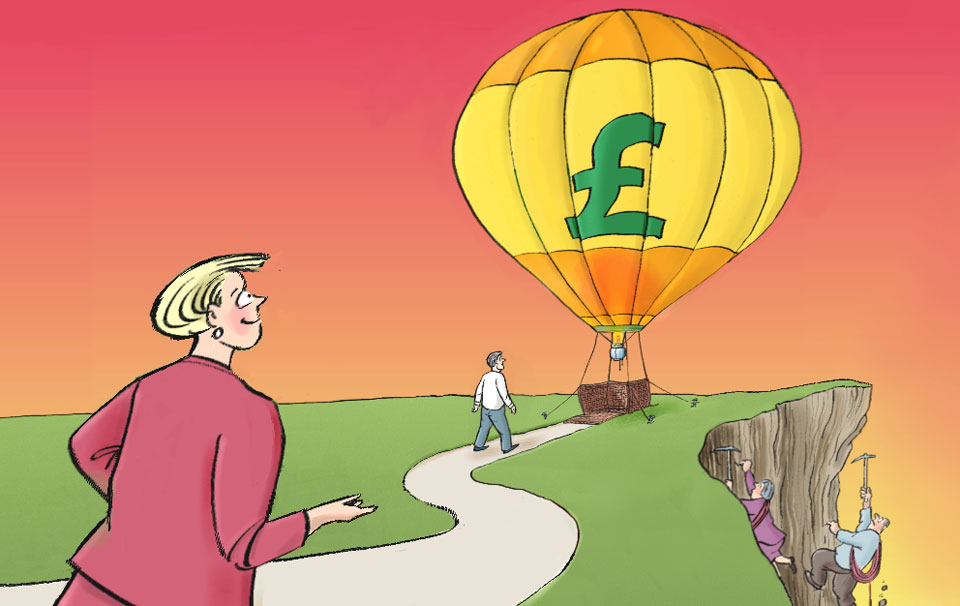 Remember that whatever your situation, the amount you need to save – to hit your target pension income, years from now, will vary a great deal on the assumptions you make.

There are lots of variable factors to take into account – when planning your pension. And we’ll explore these in detail another time.

For now, if you look at the assumptions I’ve used – to lower the estimated cost – you’ll start to see why the estimates you’ll get (from advisers or online systems) can vary so much.

Long term financial life planning is not an exact science

No one has any idea what investments will return, or where gilt yields (for annuity pricing – if indeed that is your chosen income vehicle) will be… forty years from now.

However, it’s fair to expect that a 25-year-old pension saver (receiving ‘matched – or near matched’ contributions from their employers) could build a reasonable starting income at age 65 – even if they use modestly optimistic assumptions in their planning.

And what’s certain is that they’ll have no pension income at all – if they use ultra-conservative assumptions – that put them off saving altogether… and they take a lot more holidays instead.

You need to steer clear of the nonsense that’s written about pensions. And, sadly, there’s plenty of that out there.

For more ideas around money and personal performance, in an occasional newsletter, sign up here.