Home > Achieving more > Help your children to help you more

And take 'that' stress out of your life 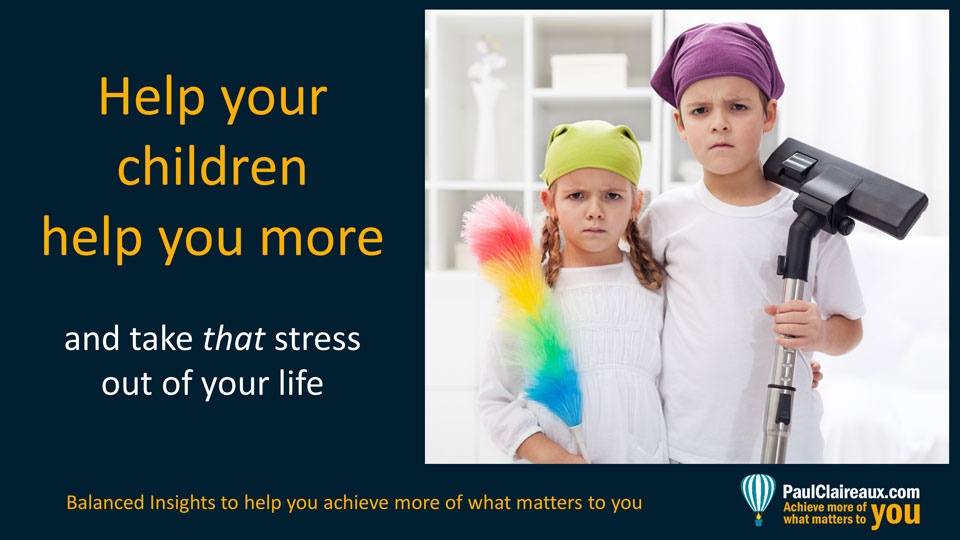 Children… doing more around the house?

Yes, I know it sounds impossible, but it’s not.

So, let’s get straight into this.

There’s a time as children grow up when they start to seriously assert their own free will… and no, I don’t mean at age 2 or 3!

Sure, that’s a difficult time too, but at least at that age, you can pick them up and walk out of the shop 🙂

You don’t have that option when they’re 13 or 14 but there are ways to bring them around to more ‘reasonable’ and fair behaviour and you could even get them ‘offering’ to do more around the house.

Here are some thoughts on an approach to that – which worked well for us – albeit after a good deal of heartache.

So, I hope this Insight finds you at an early stage on this journey.

Sometimes, as parents, when we’re overloaded with work, we might (just occasionally) lose our temper with those who are not ‘pulling their weight’.

It might be that colleague at work… you know, the cheery one who always leaves work bang on the stroke of 4.p.m. despite not turning up on time – and spends most of their day chatting nonsense to others 😉

Perhaps it’s our children, who somehow acquired a belief that they have a right to spend all their non-school time on computer games – or chatting nonsense about ‘selfies’ on Facebook – without lifting a finger to help around the house.

So, there’s a theme here alright but it’s not about chatting nonsense – that’s just a symptom of having too much ‘free’ time.

What links these incredibly frustrating behaviours is something called ‘learned unhelpfulness’… and guess who’s responsible for teaching them that – on the home front.

Is that really a thing?

Well, clearly unhelpfulness is a thing; any parent knows that!

The key questions are these:

I’ll offer some thoughts on point 1 below – and the good news on point 2 is that we can help our children unlearn this, and very quickly too.

As to whether ‘learned unhelpfulness’ is an accepted psychological condition – I don’t think so.

I made up the term although it’s similar to a more serious condition and might even be the mild form of the same thing.

This is the academically accepted version of the behaviour I’m alluding to – and it’s simply what it says on the tin.

It’s a learned behaviour, found in humans and other animals, where we don’t bother to deal with unpleasant situations (even when it’s possible) if our repeated past experiences suggest that our efforts will fail.

The research into this started in 1967, led by an American psychologist Martin Seligman as an extension of his interest in depression. You can learn more about that here and be warned  – it involved some cruelty to animals which I can’t believe would be allowed today.

OK, but what unpleasant situations are being avoided?

Well, let’s think about what happens on those occasions when our children get involved in some housework.

What could possibly be a repeatedly unpleasant situation for them – that might discourage them from ‘stepping up’ in future.

Surely, most people’s first efforts on new jobs are poor quality. So, perhaps we simply need to agree to teach the new student how to do the job – as you would do as part of any work contract.

Well, yes, I think we need something like that – an agreement about who’s doing what. After all, without some kind of deal, we can all get distracted from our goals, right?

The problem is that you might meet with a lot of resistance if you suggest talking about a contract with your children.

Newton’s reverse law of human behaviour will always kick in.

They won’t move in the direction you push…

…and the harder you push – the further they move…

…in the opposite direction.

But what if we asked the child to be in charge of the conversation?

What would happen if we set them the problem – to see what solution they could come up with… and then have the discussion with them as the chairperson?

Could that work, or am I dreaming?

Well, no, I’m not dreaming and we’ve done it.

A few years ago this ‘lack of help’ issue had got beyond a joke for us – which is probably not surprising when you know that in our ‘blended family’ we had 5 children to manage – for part of the week, at least.

So, one day, having tired of the traditional approaches to work requests – I decided to try something different.

I disappeared into my office – and as I often do, switched on my computer and booted up my favourite application, Microsoft Excel.

I solve a lot of problems on that😊

I drew up a table of all the jobs we were doing to keep the household going.

I don’t know if you’ve ever done that, as a parent, but it’s a ruddy long list.

I then handed a paper copy of this list to each of our children – and asked them each to review it (individually) with the following instructions:

I then asked them to nominate a chairperson for our meeting to discuss.

This was a real wake up call for the kids – as it was for me too.

I certainly don’t make any claims about being the perfect parent – and I made my share of mistakes along the way.

So, I’m not going to pretend that this change was plain sailing. And we certainly did have a few ‘words’ about what would be a ‘fair share’ of housework – due to our blended family situation – with children moving between homes to different degrees. All very complicated.

However, what matters is that we got there in the end.

We, or rather the children, delivered a step-change in their attitude to housework – and in their willingness to ‘chip in’.

Sure, they still needed a ‘nudge’ from time to time after that 🙂 but keeping the list visible in the kitchen for a while, helped remind them of our NEW deal.

When I think back on this, and various other potentially ‘fiery’ challenges at home or at work, it’s clear that helping others to think and solve their problems for themselves is often the best solution; that’s really all we did here.

Whatever we might think, the truth is that fundamentally, most people are reasonable and ‘fair’  – if we give them a chance to be so and the information to work it out.

This is a much better approach than another ‘unpleasant scene’ which only leads to more learned helplessness in the future.

Now, funnily enough, it’s not just those ‘other’ people who let jobs slide – for reasons of learned helplessness.

Let’s be honest, we all do it when it comes to planning our money for the long term. Perhaps you’ve looked at this before a few times, found it to be an unpleasant experience, and given up on it.

I understand that, but there is another way – and you can even have fun learning about this stuff, if you follow someone who knows their stuff – and understands that we’re all human.

So, if that’s of interest, grab that free newsletter for more, occasional, ideas to help you achieve more of what you want.

It certainly helped us 🙂

As a thank-you for signing up to newsletters, I’ll also send you:

That last item is also something we used to good effect with all 5 of our children before they went off to University.

If any of that’s of interest –click here– and good luck with everything.

All the best for now,