Home > House prices > When will interest rates go up?

When will interest rates go up? 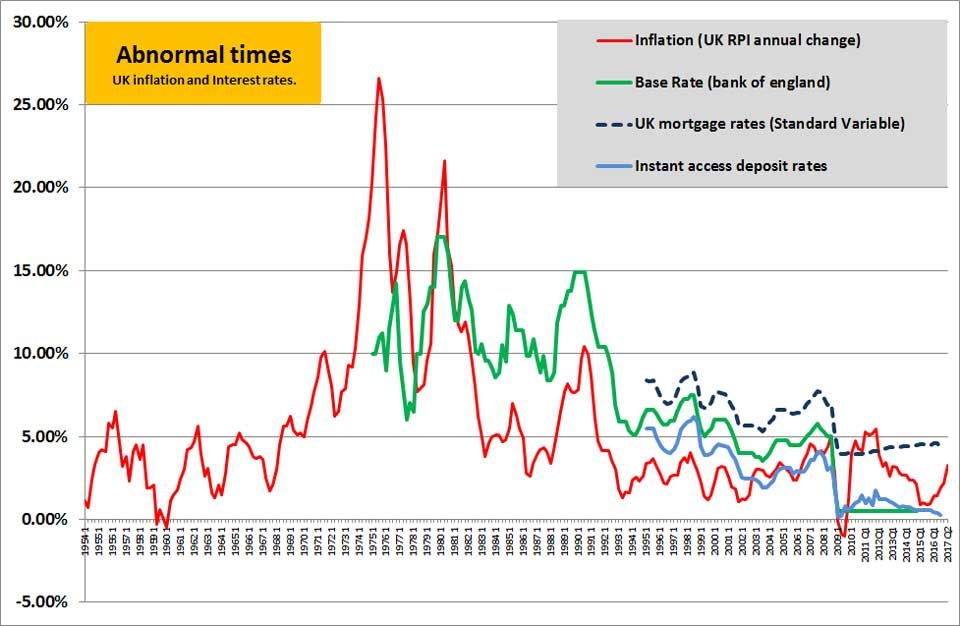 When will interest rates go up?

This is surely the biggest financial question on everyone’s mind. Whether you’re saving for a deposit on a home or you already have one with a big mortgage attached, or you’re nearing retirement and concerned about annuity rates. You’ll want to have a view about this.

A lot of the ‘experts’ have been surprised at how long our so-called ’emergency’ low interest rates have remained in place. Although I did hear the economist Roger Bootle warn (in 2009 at the Personal Finance Society conference) that we might have rates on the floor for many years to come.

He compared the deflationary risks in the West to those suffered by Japan after 1989.

Well, short-term rates are controlled by the central banks – so that’s the Bank of England (BoE) for us in the UK.

Here’s the history of the BOE base rate all the way back to 1694 – from today’s Financial Times (FT) and I’d recommend following the FT for more long term perspective on this. 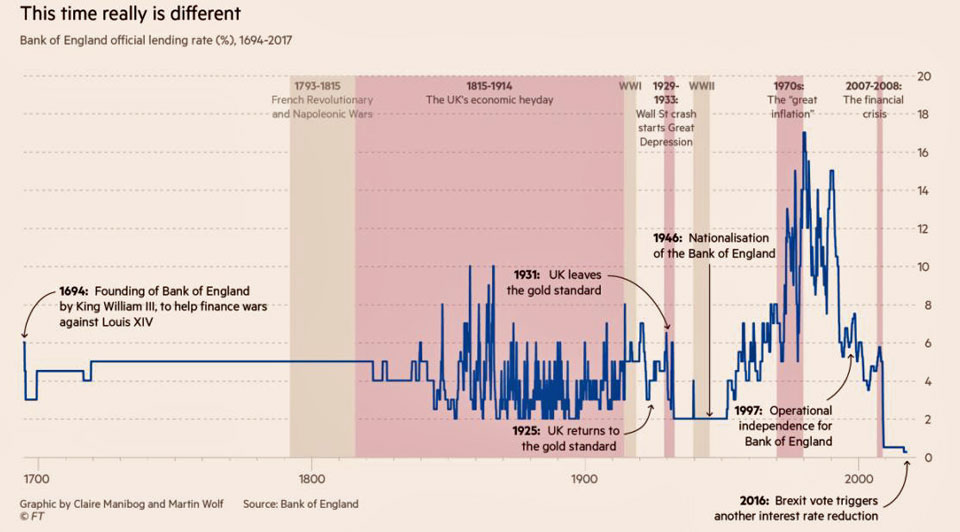 The UK had never had interest rates below 2 per cent before the Global Financial Crisis.

Now, the Bank of England said in 2016 that they’d be happy (to support economic recovery) to let inflation rise a little above their target (that’s 2% p.a. for the UK) before they start to raise rates.

And with the Consumer Prices Index (CPI) now up 2.6% year on year – and the Retail Price Index (RPI) up at 3.6% I guess they might start ‘thinking about’ raising rates quite soon now.

The BoE no longer give ‘forward guidance’ on the direction of the next move but they have said that there are ‘limits’ to their tolerance of high inflation. And we did learn that we came close to a rate rise in May with

That was an unexpectedly close vote. And, according to the Financial Times, the last time there were three dissenting votes on the MPC was in May 2011.

So inflation is rising a bit

This is because the ‘pound’ fell sharply in value since Brexit – and that makes imports more expensive.

And rising inflation is normally the point at which interest rates start to rise.

But, if prices stabilise after a ‘one-off’ fall in the pound, and the economy shows few signs of serious growth, then the BoE might keep rates lower for longer.

However, if our currency continues to fall, the BoE may act sooner, since one of their core responsibilities is to maintain financial stability. See here

What’s more,  the Bank for International settlements (BIS is the central bank for all other central banks!) is also getting concerned about ‘stability’ of the global financial system.

“Keeping interest rates too low for long could raise financial stability and macroeconomic risks further down the road, as debt continues to pile up and risk-taking in financial markets gathers steam”

Their warning acknowledges that central banks are now caught between a rock and a hard place.

They realise that raising rates too quickly could cause a panic in markets that have grown used to cheap central bank cash.

But they’re warning that delays to rate increases could mean rates having to rise further and faster when they come – to prevent the next crisis.

So the mood music around interest rates has changed, quite dramatically now.

And even before this shift, a leading fund manager, Richard Buxton, was saying (in late 2016) that the UK might raise rates in 2017 despite the UK economy slowing down.

Buxton’s argument was that with the US now on a path to increase their interest rates, the UK may have to increase rates to avoid too much pressure on the pound.

Yes – I know – I’m starting to sound like an economist. They tend to hedge their views with this sort of talk 🙂

Indeed, former US President Harry Truman, famously asked to be sent a one-armed economist, having tired of exponents of the dismal science proclaiming, “On the one hand, this” and “On the other hand, that”.

But that’s how it is.

All else being equal, as economists also love to say 😉 . . . the BoE would normally wait for clear signs that the economy is picking up steam again before raising rates.

That’s a function of a great many unknowns – both here in the UK and in the rest of the world.

And no one in their right mind would claim to be able to forecast the net impact on the UK of all the possible known variables let alone the unknowns.

One big factor that’ll drive our economy, is what big, job-creating projects the Government announces for the coming years.

And, at the time of writing there are several of those on the starting blocks.

There’s the high-speed rail project, some nuclear power stations and a lot of houses to build for starters.

What’s more the Government seem to be doing okay (at the moment at least) in persuading big industry (like Nissan) to stick with us despite the Brexit uncertainties.

But I guess that game is only really about to start for real.

So, if the economy picks up and wages start to rise (due to demand for workers) then interest rates will follow.

What if you’re renting?

I realise that this is frustrating if you’re renting a home – and trying to save for a deposit.

But bear in mind that, if interest rates stay near zero for much longer, it’ll be because our economic outlook is poor.

And a weak economy (and lost jobs) would not be supportive of house prices at their currently inflated values.

So I think something has to give – and quite soon now.

And there’s another point to bear in mind here.

And that tempts people out of deposits and into riskier investments – at a time when those assets are already, arguably, over priced.

So this is not just about interest rates.

Most intelligent economists would agree that leaving rates on the floor for so long has made our whole financial system less – not more stable.

Of course, if you’re saving regularly into stockmarket-based funds (inside ISAs or pensions for example) then YOU have less to worry about.

If markets take a set back – YOU can smile 🙂  because your future savings then buy into the markets at a lower cost.

(You can learn all about this concept – and many others – in my book, Who Can You Trust About Money )

But for many people a rise in interest rates and a possible set back for markets – will not be such good news.

So, take care out there