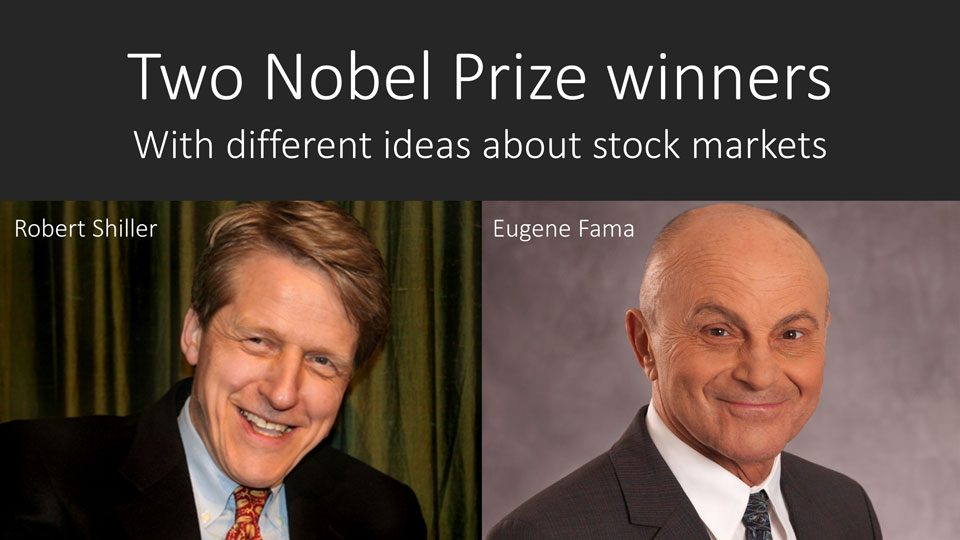 Some wealth managers promote their investment service as being robust because it’s based on the ideas of a Nobel Prize-winning economist.

The trouble is, they don’t tell you about the other Nobel Prize winner of the same year, who had very different ‘herding’ ideas about what drives prices in stock markets.

In this Insight, I attempt to outline both sets of ideas. You must decide which one is most useful to you right now. 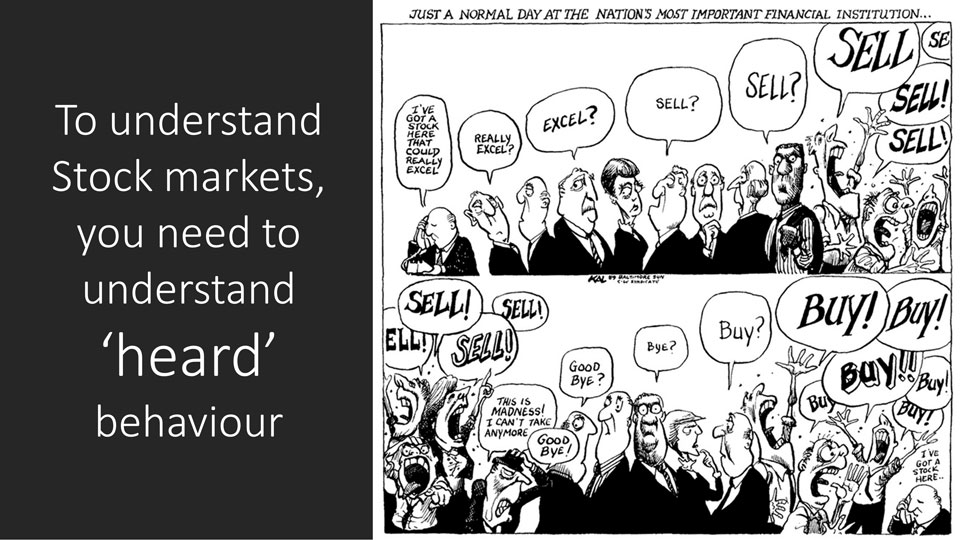 What follows is an extract from my book, ‘Who misleads you about money?’

In 2013 there was, for a change, some excitement in the economics profession.

The Royal Swedish Academy of Sciences awarded Nobel Memorial Prizes in Economics to two economists, Eugene Fama and Robert Shiller whose separate studies had been central to the debate about the behaviour of asset markets.

But this was an astonishing decision because these guys’ theories were completely at odds with each other.

As Professor John Kay pointed out (Financial Times, 15 October 2013) this was “like awarding the physics prize jointly to Ptolemy for his theory that the Earth is the centre of the universe and to Copernicus for showing it is not.”

Sadly, John Kay then pulled his punch, saying, “actually, it is not as bad as that analogy suggests”, and went on to explore the different ideas of Shiller and Fama.

However, what this proved (a full five years after the 2008-09 Global Financial Crisis!) was that:

the economics profession was still unclear and confused about how markets for assets work.

The Academy might argue their award to Professor Shiller proved that they accepted the idea of economies being driven by real humans (rather than those ‘rational robots’ of orthodox theories) and that human behaviour is confused, irrational and, most importantly, herd-like after all.

But if this is so, why would they make an award at the same time to Eugene Fama, the father of efficient markets theory?

Why did they want to have a foot in both camps?

After all, according to the New York Times (14 October 2013), Professor Shiller himself had written, in his book, Market Volatility, that the assertion that stock prices were rational was:

“one of the most remarkable errors in the history of economic thought.”

And the episode is even more surprising when we note the work of another Nobel prize-winning economist, Joseph Stiglitz, who wrote a paper with Stanford Grossman in 1980, entitled:

‘On the impossibility of informationally efficient markets’!

Their argument, in simple terms, was that we cannot assume everyone to be both rational and irrational at the same time.

The idea of efficient markets is a compelling one

You see, if market participants acted rationally (at least on average) in buying and selling securities, then this activity might deliver correct (fair) prices.

On the other hand, if markets were perfectly priced at all times, it would be ‘irrational’ for any active manager to spend any effort and money seeking out the imperfections in it.

Now that is quite a paradox!

So, markets can only be efficient pricing mechanisms for securities to the extent that we have enough active managers ignoring the efficient markets theory and getting on with the work of analysing which securities are the best value to buy!

Here’s an easy way to think about this.

If you were in ‘supermarket checkout queue’ and assumed that the queues system was perfect, you’d stand quietly and obediently in your queue, refusing to take advantage of any empty checkouts that became available.

And yes, that is exactly what tends to happen in some British supermarkets!

But let’s be honest, it’s quite dumb behaviour!

A brilliant summary of the different ideas from these two Nobel winners was provided by Gavyn Davies (a widely respected economist) in the Financial Times (20 October 2013).

To put that another way, according to Fama, most of the variation in asset prices is determined by changes in risk appetite.

So, when our risk appetite is high, we accept high asset prices because we accept a low expected rate of return to compensate for our risk.

Likewise, when our risk appetite is low, we let asset prices fall until their expected returns are high.

Shiller, on the other hand, and perhaps more in line with our experience, expects investors to be optimistic (bullish) at the top of the market and pessimistic at the bottom.

Can these opposing views both be right?

Well, I’m sorry if these contradictions from experts mess with your mind but the truth is they do both have a case.

Fama’s point is logical enough – for people who are informed about markets and who operate logically, as orthodox economics assumes.

Think about it. If you have a big appetite for risk then you will buy risky assets at higher prices, despite their prospective returns being lower than they would be if you bought at a low point.

You’re accepting those risks for a lower return. That’s what having more appetite for risk is about.

And if you can’t get any return on cash deposits, it doesn’t take much to give you an appetite to risk.

It’s not rocket science, this. And it explains why our 12 years of near-zero interest rates have caused such bubbles in asset prices.

Incidentally, the serious risk of market trouble has recently been flagged by central bankers like Christine Lagarde at the ECB. Ironic that, given that they are the people who’ve inflated these bubbles!

Investors go into risky assets at high points with a naïve hope for a continuation of those high returns!

And there’s empirical evidence for Shiller’s view – in research by Robin Greenwood and Andrei Shleifer at Harvard (‘Expectations of returns and expected returns’, January 2013) – showing that investor expectations are indeed highly positively correlated with past stock returns and with the level of the stock market.

In other words, we wrongly believe that past performance is a guide to future performance – which is very odd given that every investment product must, by law, carry this warning. 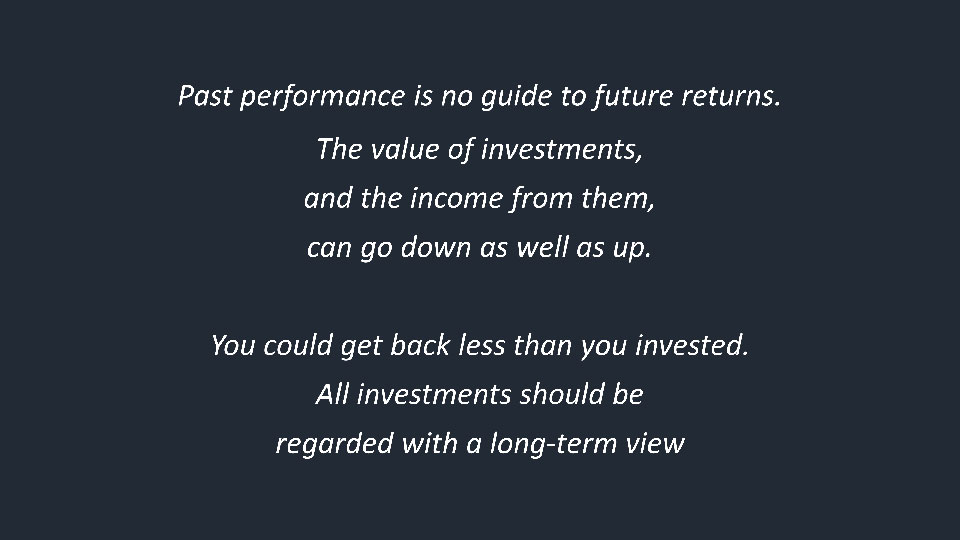 The truth is that we love to buy in at the top of stock-market price cycles, and there’s more evidence of that in this chart.

Yes, it needs updating. Sorry, I’ll get around to it at some point. 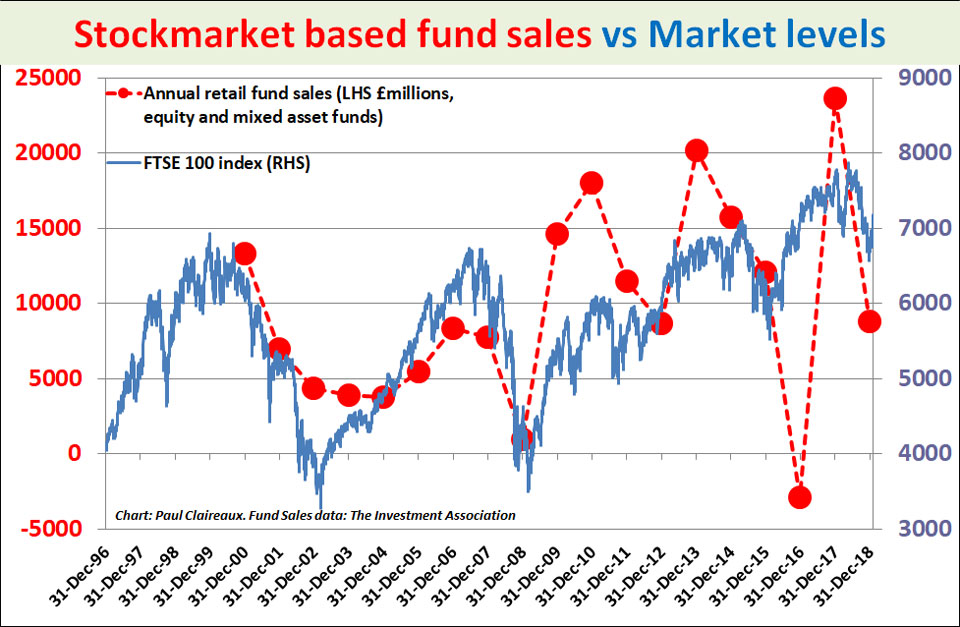 Or, as I prefer to illustrate it: 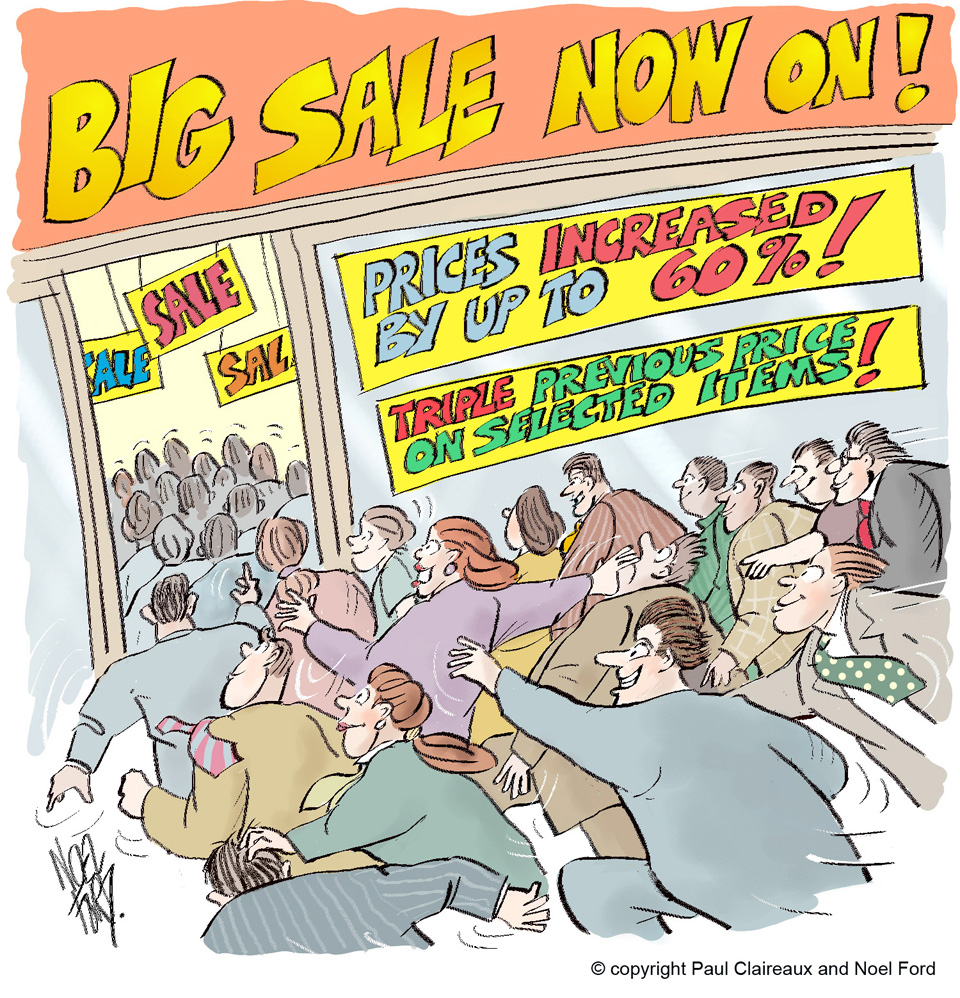 What’s the conclusion – from all this confusion

Well, I hope we can agree that it’s beyond most ordinary investors’ abilities (including mine) to create a portfolio of stocks that has a good chance of outperforming the wider market without being exposed to extra risks.

So, if the idea of the efficient market persuades us to:

then it’s helpful for most savers and investors.

That said, I’d hope we can also agree that it’s positively dangerous to conclude, as some ‘efficient market’ fanatics do, that the aggregate level of the stock market is correctly priced to offer good prospects for returns at all times.

This is an especially risky view to take at times when prices for so-called ‘risk-free’ assets (like cash and government bonds) are completely distorted (propped up) by central bank money creation – as they have been since the financial crisis of 2008-09.

Stiglitz and Grossman noted that completely efficient markets were logically impossible, and Daniel Kahneman (another Economics Nobel winner) has shown that we humans do not act rationally a lot of the time.

Robert Shiller himself has also said that:

“Mass psychology may well be the dominant cause of movements in the price of the aggregate stock market.”

Which is why the second part of my original book, ‘Who can you trust about money?’ was devoted to the psychological issues that surround our money management activities.

OK, but can’t we just trust in the wisdom of crowds?

Well, you’ll certainly hear some argue that occasional irrational behaviours of market participants don’t matter because they’re random in direction and therefore cancel each other out.

The argument is that it’s the average ‘wisdom of crowds’ that we should be concerned about, and in large groups, we are rational on average.

However, the ‘wisdom of crowds’ idea has problems of its own.

And those errors are common in settings that are heavily influenced by social networking and knowledge of other people’s views and behaviours.

Now, let’s think about this.

Does such a setting sound like Wall Street or the City of London (or a Reddit Investing Group) to you?

It does to me!

What is absolutely clear about markets is that an unquestioning trust in them is extremely dangerous.

And according to those, like Jeremy Grantham, who take care (and have a track record) of measuring these things – we’ve got a ton of risk in markets now too.

Let’s be very clear about this.

The whole world economy was brought to its knees by the belief that US house prices were fairly priced (and so couldn’t fall by much) when in fact they were in an almighty and obvious bubble in 2004-5, as pointed out by Robert Shiller among others.

So, whatever any wealth manager tells you, the truth is that markets do not deliver nice, neat, average rates of return (even over the long term) regardless of when you invest.

The concept of ‘average’ returns is meaningless, as are those standard deviations of risk – more on that here.

Markets (in stocks and houses) have very long cycles in which valuations shift from high to low and back again.

If you invest at a time of low valuation, you have a better chance of enjoying high returns subsequently.

If you invest at a time of extremely high valuation, your subsequent returns are likely to be disappointing and possibly negative.

So, be careful when a wealth manager says their advice is based on Nobel Prize-winning science. There are many Nobel Prize winners with theories about stock market prices, and they don’t all agree.

Relying on just one theory is a risky approach to investing your money.

I hope that was helpful.

For more ideas to achieve more in your life and make more of your money, sign up for my newsletter