Home > Advice to Avoid > The thing about economists

The thing about economists 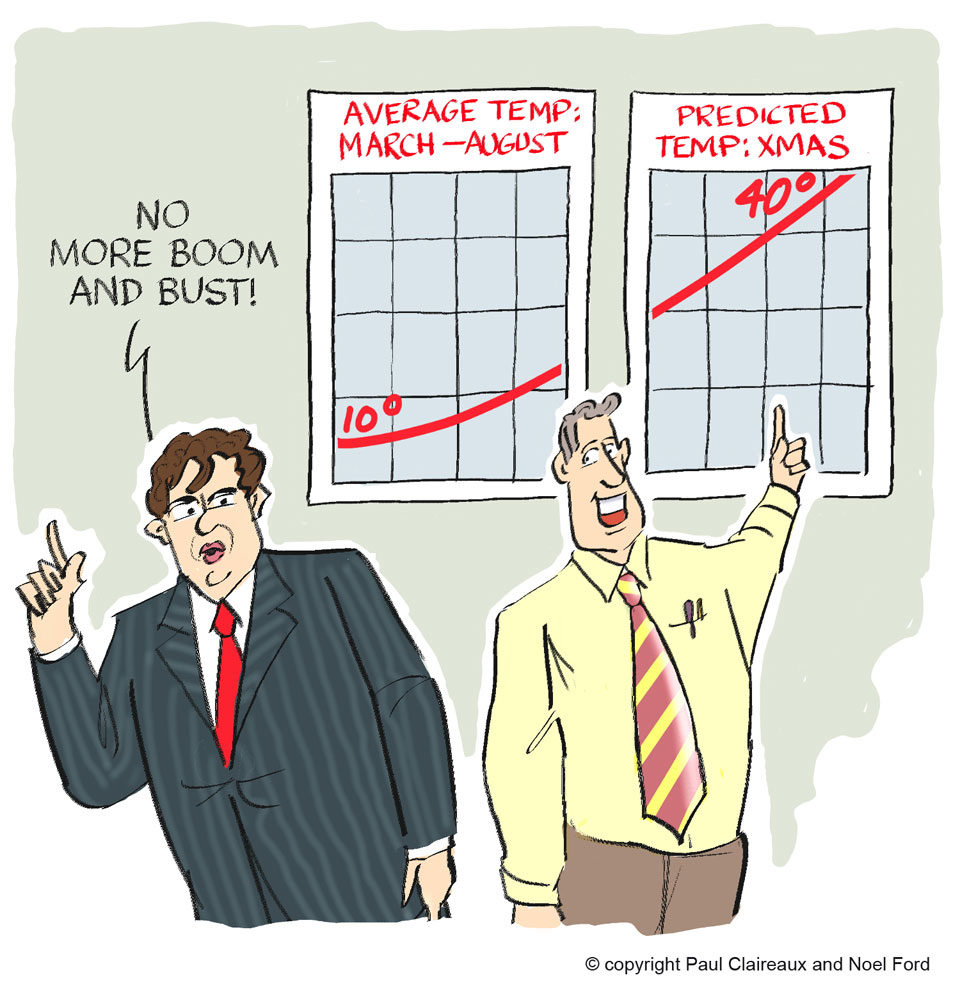 Economists have really struggled to be taken seriously since the financial crisis of 2008-09.

And that’s worrying because these experts are probably the most important policy-shaping advisers behind our politicians.

But the problems faced by economists have been around for a long time – and so have the jokes about them.

Now you might expect that with this reputation, the economics profession would work hard on its credibility after the financial crisis but no, not a bit of it.

Eugene Fama and Robert Shiller made separate studies that were central to the debate on the behaviour of asset markets. And the quite astonishing thing about those awards, as John Kay pointed out in the Financial Times (15 October 2013), was this:

“Prof Fama made his name by developing the efficient market hypothesis (EMH), long the cornerstone of finance theory – whilst Prof Shiller is the most prominent critic of that same hypothesis.”

“It was”, as Kay put it, “like awarding the physics prize jointly to Ptolemy for his theory that the Earth is the centre of the universe and to Copernicus for showing that it is not.”

You can read more on this issue in Appendix 2 of my boom, ‘Who misleads you about money?’

The sad thing about some economists is that they actually believe that there are some ‘simple’ rules of thumb for ‘looking after’ our economy.

Some will say that you simply have to get the government to ‘spend spend spend’ to keep things steady.

And there are times for doing that – as in the period after the second world war to rebuild our infrastructure.

Or after that financial crisis to avoid a meltdown in the banking system – and society!

But I don’t think that any serious economist would advocate constant government borrowing to prop up the economy each and every time it ‘slips’ a little.

That’s overprotecting the system. And wrapping ‘hardy’ organisms in cotton wool does more harm than good in the long term.

For more on that read the most excellent ‘Antifragile’ by Nassim Taleb. You can find it in my book shop here

We simply end up like Greece (or as we did in the UK in the 1970s) – which would mean we’d have to go begging to the IMF for a bail out of our finances.

And those bail outs come with an agreement to do as the IMF tells you.

So, you’ve completely lost control of your economy at that point.

A good economist will tell you that the solutions to our problems are not as simple as that.

They know, as I think we all do, that there are limits to the benefits of government spending -and that there are serious risks of having too much of it.

We’ve been down that road before and it’s a long way back.

. . . do you know what our debt has been costing us recently?

A sensible economist accepts that government investments (like private ones) can go wrong.

And they accept that a lot of government run projects overspend on their budgets – BIG TIME – which only puts more burden, not less, on the taxpayer.

A good economist knows that economies are immensely complex and they’ll admit that they do not have a good model to forecast its performance.

Some, like Steve Keen, are working hard to develop such a model.

But too many have their heads buried in their old, misleading texts.

And they keep teaching those ideas too – which is why there’s a revolt underway amongst economics students- who’d prefer to study reality than theory.

Whether this revolution is coherent – or is just adding more ‘noise’ to an already confused profession – is a question addressed by Dr George Cooper in his latest, wonderfully readable book, ‘Fixing Economics’ (Also read ‘Origins of financial crises’ by George Cooper to delve deeper into this area)

Economies are based on our human interactions and our mood swings.

So don’t let any ‘Over confident’ Economist – tell you otherwise.

And on a lighter note

When you accept these facts – that economists cannot predict anything – isn’t it funny (or sad?) that so many people (especially politicians) keep asking them for forecasts. And then mocking them when they get it wrong.

I feel for the bright Economists who’ve had to put up with much ridicule in recent years.

And I can’t imagine the anguish they felt when the Queen joined the chorus in 2008.

It was on a visit to the London School of Economics and Political Science, and she asked:

“Why did no one see the crisis coming?”

She got a letter of reply but, unsurprisingly, it wasn’t a satisfactory answer.

So, according to the Huffington Post, the Queen asked the same question again when she visited the Bank of England’s gold vaults with the Duke of Edinburgh four years later.

But this time, the answer was more revealing.

Sujit Kapadia (on the Bank’s Financial Services Committee at the time) said:

. . . because the economy was stable there was this growing complacency.

People didn’t realise just how interconnected the system had become

The royals were also told that the people at the Bank of England were there to prevent another such financial catastrophe.

And the Duke of Edinburgh then teased,

“So, is there another one coming?”

Oh, how the Duke of Edinburgh loves to joke.

Prince Philip (The Duke) will be 96 this year. So, perhaps it’s no surprise that his humour is from another era.

He’s certainly not politically correct – as Ben Macintyre observed in his excellent article ‘We are not amused and Prince Philip couldn’t care less’ (The Times, 31 May 2011). Of the Duke’s many jokes (or gaffes) Macintyre reminds us of the best (or worst), including:

– On a visit to China in 1986, when he described Beijing as “ghastly” and told a group of British exchange students: “If you stay here much longer you’ll all be slitty-eyed.”

– Again in 1986, with China still on his mind, he told the World Wildlife Fund: “If it has got four legs and it is not chair, if it has got two wings but is not an aeroplane, and if it swims and is not a submarine, the Cantonese will eat it.”

–  Upon meeting the President of Nigeria, dressed in traditional robes he said, “You look like you’re ready for bed.”

– Looking at an ill-assembled electrical fuse box in a factory, he remarked that it “looked as though it had been put in by an Indian.”

– But the ‘natives’ who’ve borne the brunt of the Duke’s jokes are not all foreign.

Talking to a Scottish driving instructor in Oban in 1995, the Prince wondered aloud:

“How do you keep the natives off the booze long enough to get them through the test?”

Well, joke or no joke, the truth is exactly what a good economist will tell you.

No one really knows whether another crisis is heading our way or when.

What we do know for sure is that they occur far more often than some experts will tell you.

So if some investment expert tries to tell you (as some will) that big problems only come along ‘Once in a generation’ – you might like to ask them to read this.

The final word on economic ‘forecasting’

Kenneth Arrow, was a Nobel Prize-winning economist who, during the Second World War, served as a weather officer in the US Army Air Corps.

He worked with those charged with the particularly difficult task of producing month-ahead weather forecasts.

And as Arrow and his team reviewed these predictions, they confirmed statistically what you and I might just as easily have guessed . . .

. . .  that weather forecasts were no more accurate than random rolls of a die.

Understandably, the forecasters asked to be relieved of this seemingly futile duty but Arrow’s recollection of his superiors’ response was priceless:

The commanding general is well aware that the forecasts are no good.

However, he needs them for planning purposes.

If you’d like to understand ‘Risk’ better than some financial advisers – and learn the best way to plan your financial future . . .

. . . just come along to one of my workshops and I’ll help you make a start.