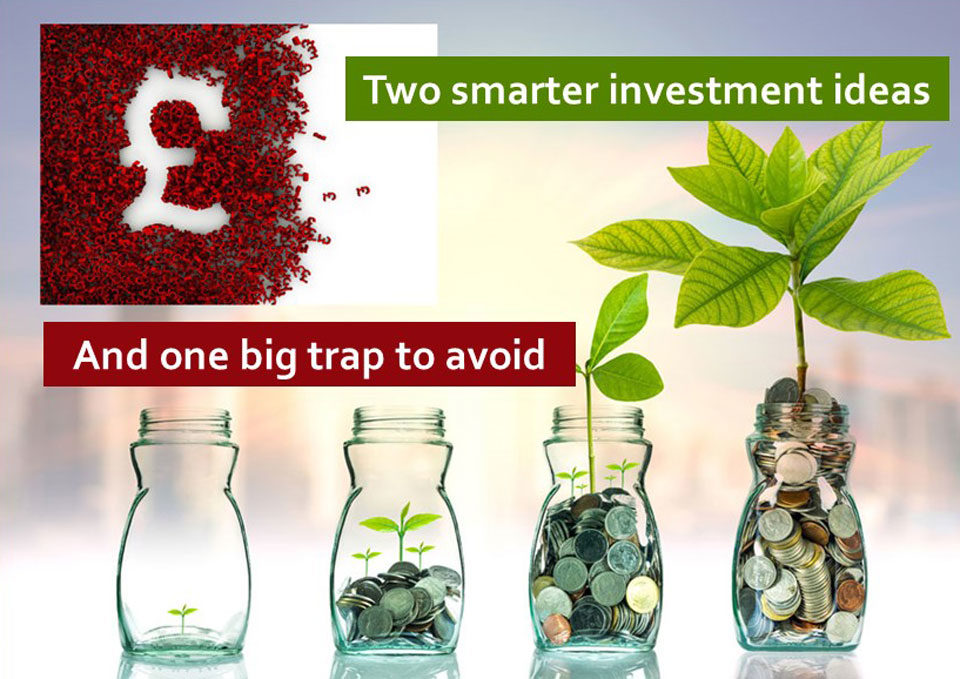 If you’re looking for some smarter investment ideas you’re in the right place.

We’re going to look at some important conclusions about investing that we can draw from a theory called the efficient market hypothesis or EMH.

Yes, I know, but don’t worry, I’m not about to explain the intricacies of the various forms of that theory here. You can find all that on Wikipedia and elsewhere.

Instead, I simply want to give you some smarter investment ideas from it.

And I also want to warn you that you could, fall into a very big trap if you ignore the problems with that theory.

Sorry, but most economic theories are like curate’s eggs  – they’re only useful in parts 😉

And if you’re in any doubt about the problems with this theory by the end of this Insight, just listen to one of the fathers of risk analysis, Benoit Mandelbrot, in this wonderful interview with John Authers of the Financial Times.

There he offers the best description you’ll find of the flawed thinking around Investment Risk that pervades the banking and investment industry.

Head over here for that wonderful interview

You’ll find it at the bottom of the page – but the ‘fractal zoom’ video at the top is pretty impressive too!

Oh, and BTW – it’s this kind of flawed thinking that was behind the global financial crisis of 2008-09. And they made a film about that ‘Flaw’ – see here

The simple and smarter investing ideas

Now, I think that we can all agree that it’s beyond most ordinary investors’ abilities (including mine) to create a portfolio of stocks with a good chance of outperforming the wider market.

And it can’t be done without being exposed to the risk of underperforming the market.

On the other hand, if you want to outperform the market – either to find more profits on the way up or to protect against big falls should the market come crashing down, you’ll need someone to invest your money in a way that does not simply copy the markets.

It’s really up to you what approach you take.

Just don’t be fooled into thinking that tracking the markets is some kind of magic bullet. It’s not.

All I can say about the “efficient markets” theory is that it’s useful if it persuades us to:

After all, under most ‘normal’ market conditions, the vast majority of your returns – over the medium to long term – will come from ‘reinvested income’ as shown here. 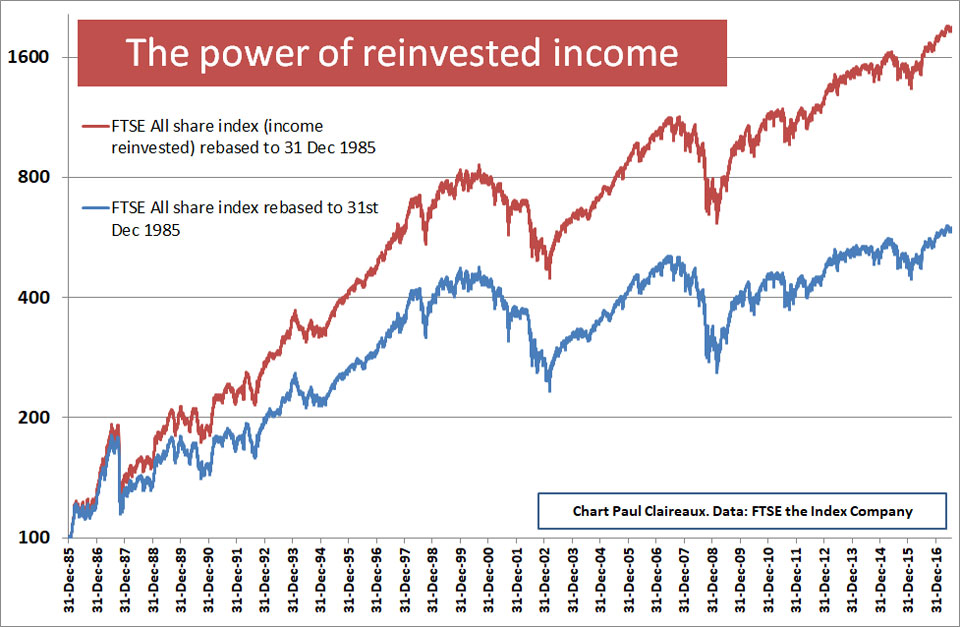 It often comes as a big surprise to new investors that their big investment returns do NOT come from the price movements of their stocks.

Okay, but what’s the big trap?

Well, we can agree that it’s difficult (even for good fund managers) to consistently pick individual winning shares (stocks)

But does that mean we should also believe (as some, fanatical ‘perfect markets’ advisers do) that whole markets (for stocks or bonds or houses) are always correctly priced for wonderful future returns?

No, of course not – the evidence does not support that claim.

What’s more, it’s an especially risky view to take at times when prices for so-called ‘risk-free’ assets (like government bonds) are completely distorted (propped up) by central bank money creation – as they have been for several years now.

But look, you really don’t need to take my word for this.

Nobel Prize-winning economist, Professor Robert Shiller wrote in his book, “Market Volatility”, that the assertion that stock prices were rational was:

“one of the most remarkable errors in the history of economic thought.”

‘On the impossibility of informationally efficient markets’!

Simply put, we cannot assume everyone to be both rational and irrational at the same time.

You see, if active investors were always rational (at least on average) when buying and selling securities, then this activity might deliver correct (fair) prices.

But then again, if markets were perfectly priced at all times, it would be ‘irrational’ for any active manager to spend effort and money seeking out the imperfections in it.

That’s quite a paradox!

So, markets can only be efficient pricing mechanisms for securities to the extent that we have enough active managers who ignore the efficient markets theory and get on with the work of analysing which securities are the best value to buy!

Or, to use a classic ‘supermarket queues’ analogy, if we all assumed that the queues system was perfect, then we’d all stand quietly and obediently in our queues, refusing to take advantage of any empty checkouts that become available…

and that, by the way, is a typically British but dumb behaviour!

So, the problem is that as more and more of the market is controlled by ‘dumb’ Index tracking funds – the more inefficient it becomes.

Daniel Kahneman (another Economics Nobel winner) has shown beyond any doubt that we humans do not act rationally a lot of the time.

Whilst Robert Shiller himself has said that:

“Mass psychology may well be the dominant cause of movements in the price of the aggregate stock market.”

And that’s why, the second part of my original book, ‘Who can you trust about money?’ is devoted to the psychological issues that go with smarter investment ideas.

Now, some perfect market fanatics will tell you that the occasional irrational behaviours of market participants simply don’t matter.

these ‘irrational’ actions are random in direction,

and therefore, on average, they cancel each other out.

Is that right? Can you, really, trust in the wisdom of crowds?

Well, some will tell you that you can.

That the ‘wisdom of crowds is what keeps prices at around the right level at all times.

And I saw this argument again today, in a professionally produced and widely distributed video used by a number of advisers to convince you of this case.

They will tell you that in large groups we can rely upon humans to be rational – at least on average.

Unfortunately, this ‘wisdom of crowds’ idea can be very misleading.

Research by Jan Lorenz, Heiko Rauhut and others, outlined in their article ‘How social influence can undermine the wisdom of crowd effect’, shows that a crowd view often produces very large errors.

Indeed, they found that large errors are more common… ‘in settings that are heavily influenced by social networking and knowledge of other people’s views and behaviours.

Right. Well, that’s precisely the kind of setting you’ll find on Wall Street or in the City of London…

or… among the Robin Hood traders who drove up the price of the Litecoin Investment Trust!

Aaghhh. So, what is true about markets?

What’s absolutely clear is that an unquestioning trust in markets for assets (whether that’s shares or property) is extremely dangerous.

The shocking truth is that the whole world economy was brought to its knees by the belief that US houses were fairly priced – and so were unlikely to fall by much.

And to see how laughable an idea that is – or if you just like watching Brad Pitt or Steve Carrol or Christian Bale – check out the most brilliant, “Big short” film soon.

House prices in the USA – and the UK were in an almighty and obvious bubble in 2004-5, as pointed out by Robert Shiller among many others.

So, whatever any adviser tells you…

the truth about markets is that they do not deliver

nice, neat, average rates of return  (even over the medium term)

irrespective of when you invest.

That is a most dangerous idea. And so, are the flawed models of risk used to persuade us that we can somehow predict the chances of trouble in markets.

Markets (in stocks and houses) have very long cycles

and valuations are constantly shifting from high to low and back again.

That much is clear See here

So, if you invest at a time of low valuation, you have a better chance of enjoying high returns subsequently.

If you invest at a time of high valuation, your subsequent returns may be disappointing and very possibly negative.

This Insight was based upon ideas in this acclaimed book.

And please share your thoughts in the comments below. I’d love to hear from you.

You can log in with your social media or DISQUS account OR To “post as a guest” – just add your name and that option will pop up.