Home > Plan your Life > Should we increase tax rates?

Should we increase tax rates? 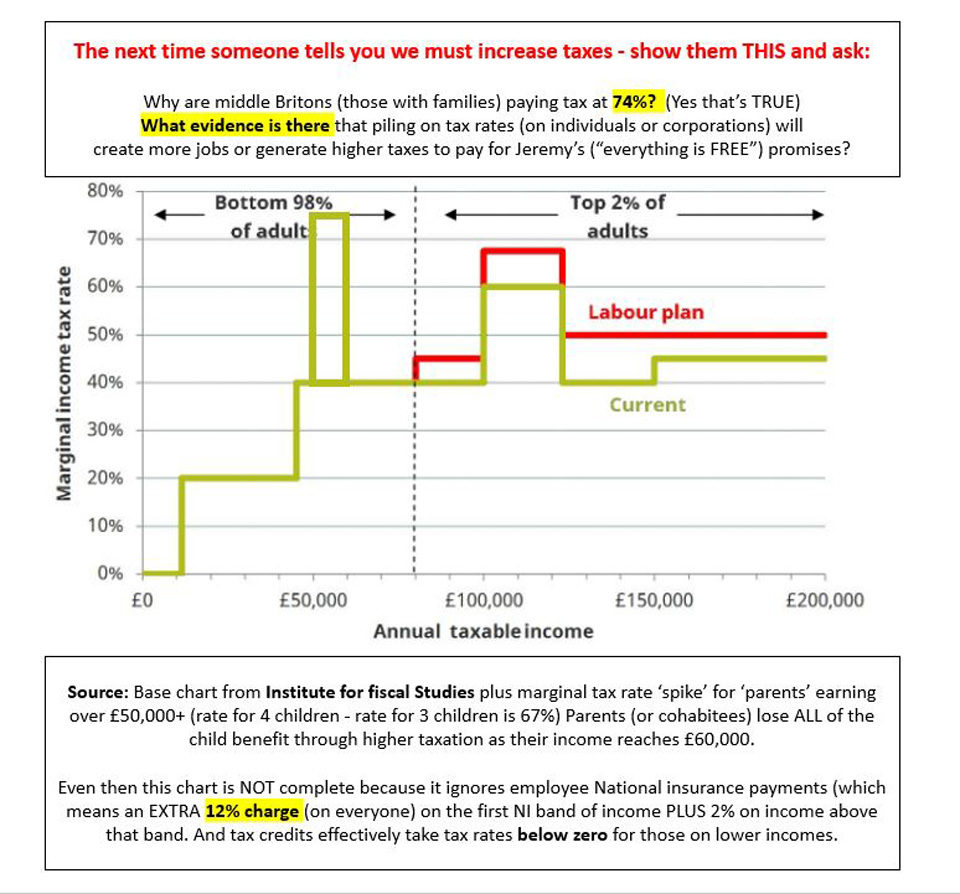 So, should we increase tax rates?

Well I guess your answer might depend on what rate you pay today.

And whether you’re one of those hard working middle Britons – and trying to raise a family whilst suffering tax at over 70% on every extra pound you earn!

Oh yes, this is what really goes on.

So, let’s look at the FACTS about how tax works today – and where Labour might take things, in the unlikely event that they’re elected.

My view is that middle Britons with families need to be treated a LOT better.

These people along with all other ‘reliable’ workers – are holding the country together.

But they also raise the children for all our futures.

So, that’s two jobs for society – as any parent will tell you.

And yet they get ‘stuffed’ by the government with tax.

Does that seem right to you?

So let’s explore this some more

In this election – as with every other – the question of how you’re taxed and how the government spends your money is a key issue.

It’s YOUR money that gives the politicians their power although some of them seem to forget that . . .

. .  . or rather they simply don’t believe it’s yours to start with!

For some politicians, YOUR money (and large parts of the economy) should belong to the STATE.

Yes, you might need some of your money – and they’ll give you some back by way of tax reliefs.

But they see that as THEIR way of giving to you rather than taking less of what’s YOURS.

It’s a very twisted point of view but it wins a lot of votes!

Anyway, it’s worth thinking about just how much of your money, you’re happy to give to the taxman.

We can all agree that we need to properly fund public services (schools, hospitals, emergency services, defence, etc etc)

And old age pensions of course – though I’m not sure why these should increase by 2.5% p.a. EVEN when there’s no inflation and working people are not getting pay rises.

So, what's a reasonable 'slice' of your income to pay in tax?Click To Tweet

How much should you give?

In the 1966 song ‘Taxman’ by George Harrison (the opening track on The Beatles’ album ‘Revolver’) we hear about the obscene levels of tax that were applied under Harold Wilson’s Labour government at that time.

And note how, in this performance of his song (with Eric Clapton) George adds some funny NEW lyrics.

But this ‘extended version’ includes:

And he may have been onto something there – with regard to health services  – but that’s another issue.

George Harrison’s idea for the song came to him when he realised that he, and the other Beatles, were giving most of their money away in taxes.

And the fact is they WERE ‘hit hard’ with tax.

Most of their earnings would have been in the top tax bracket so . . .

They were liable to a 95% rate of super tax.

This song of complaint tells how, at the margin, they received just £1 for every £19 they handed over to the ‘taxman’

That’s a joke – but what’s amazing is how that extraordinary rate of tax is not the highest ever applied in the UK.

And that was just short of the highest ever rate of tax in the UK. That peaked in the Second World War at 99.25%.

Now, let’s be clear, the top tax rates in those days were abusive.

And it’s really no surprise that we suffered the same kind of ‘brain drain’ of professional people from the UK in the 1970s as some poorer European countries have suffered in recent years.

Nor should we be surprised that such government aggression towards taxpayers spawned a huge tax avoidance industry.

I think any reasonable person would want to know how to ‘legally’ avoid (not evade) this sort of tax abuse. 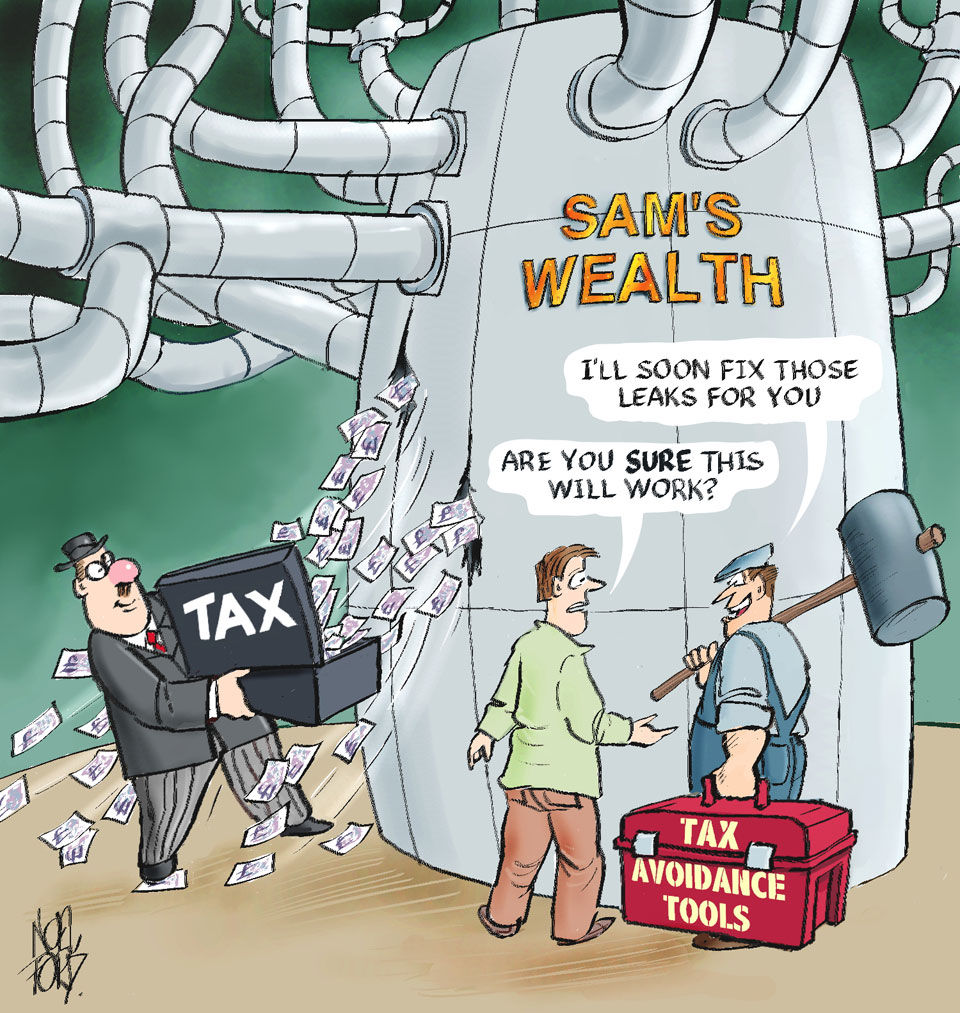 Back to the future

Of course, times have moved on, and the core rates of tax are much lower today than they were in the 1970s.

Now, the only excitement you’ll hear is on the long running ‘debate’ about whether ‘high earners’ should pay 50% rather than 45% tax.

And there’s now some noise coming from the Labour party about lowering the ‘high earner’ threshold down to £70,000 p.a.

Indeed, there’s even some noise about the conservatives, if re-elected, raising taxes or national insurance before 2020. They’d previously promised not to do so.

And, frankly it’s only fair to ask the self employed to pay a bit more NI in the future. They recently enjoyed a VERY large increase in their state pension entitlement and it needs to be paid for.

But what you won’t hear any politician advertise are the abusively high rates of tax that already exist in the UK – on people earning much less than £70,000 p.a.

Some middle Britons are already paying tax at rates of 70% or more.

This is because your household will lose ALL of your child benefit as your income reaches £60,000!

And you start to lose the child benefit once your income exceeds £50,000

Here are the numbers 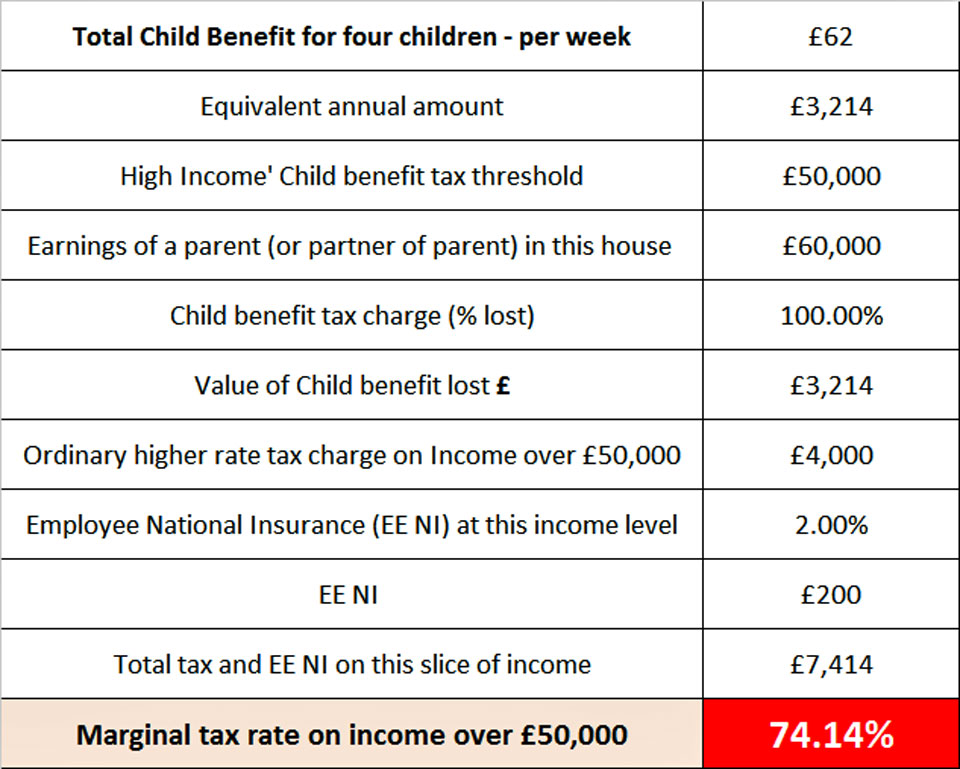 Now, you may think that I’ve chosen an ‘extreme’ case to make the point.

And you’d be right – that example above is what currently happens to a family with four children.

Okay but how is your income taxed above this band?

Well, the ‘good’ news for you if you’re a hard working, family raising, middle Briton, is that your tax rate on income above £60,000 falls back to 40%.

And most people will tell you that 40% is all you’ll pay on each extra pound of income until it reaches £150,000 p.a. – at which point, as we all know (because the politicians keep arguing about it) your tax rate rises one last time to 45%

But that’s not true!

You will be hit by another “kink” in the income tax system once your income reaches £100,000 p.a.

Well, this is because once your earnings go over £100,000, you start to lose the tax-free band of your income (aka the personal allowance (PA) )

Okay but where does the 60% tax rate come from?

So, effectively, you get taxed twice on that extra income.

Okay, sorry about all those numbers but I hope you’ve got the key message here.

Hard-working, family raising, middle-class Britons are actually paying tax (at the margin) at rates of 60% and even over 70% in some cases.

I think we can agree – that this is mad – but here’s something that might surprise you even more . . .

Those 70%+ tax rates in the UK were brought in under a Conservative-led coalition!

So, both main political parties are happy to ‘hit’ hard-working middle Britons, hard for tax revenue.

You’re an easy target and there are lots of you.

Of course, you must decide who you trust to tax you fairly in the future.

But I do have a suspicion that we might head back to the bad old days if Jezza gets in with HIS spending plans.

And, like our friend in the cartoon above, beware of anyone touting ‘aggressive tax avoidance’ schemes.

Those things have got a lot of wealthy and famous people into BIG financial trouble in recent years.