Home > Advice to Avoid > How obedient are you to authority?

How obedient are you to authority?

And how's that affecting your finances? 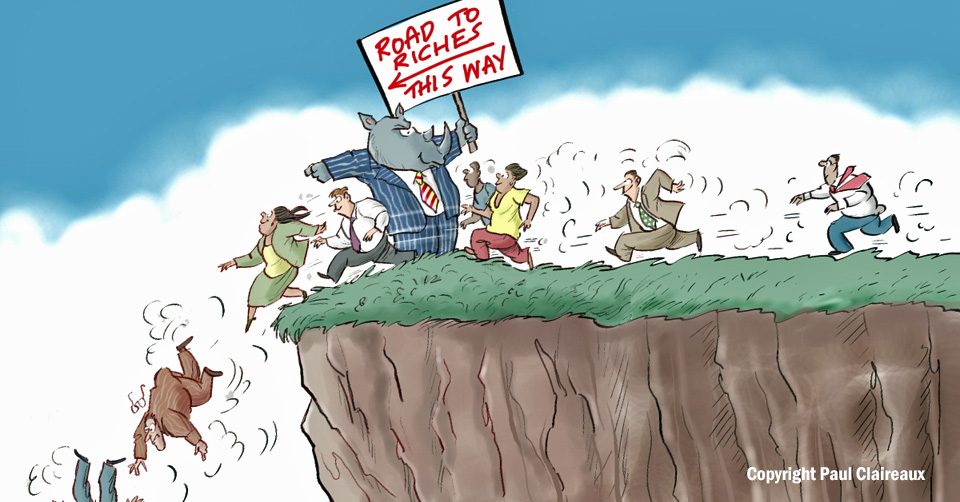 Perhaps it’s obvious that obedience to authority does not always serve us well, but the truth is that most people are very obedient.

Most people will accept instructions to do crazy or even dangerous things; it’s simply part of our human condition.

Stanley Milgram, a Yale University psychologist, proved this point about obedience with his famous and shocking experiments in the 1960s.

This was around the time of the trial of German Nazi war criminal Adolf Eichmann in Jerusalem. And Milgram’s research was devised to answer the following questions:

And was there a mutual sense of morality among those involved?

You might think that the tens of thousands of accomplices (who must have been involved in sending millions to their deaths in the gas chambers) were all acting against their will; that many of them feared for their lives if they’d disobeyed orders – and I’ve no doubt that’s true in many cases.

However, Milgram’s research suggests that many of these accomplices may not have even have questioned what was going on.

What he revealed was a powerful human tendency to follow orders… even when those orders violate our deepest moral beliefs.

[ Milgram’s findings are outlined in a 1963 article published in the Journal of Abnormal and Social Psychology and in his 1974 book Obedience to authority: An experimental view.]

So, because this is a natural human behaviour, it persists today, and the same results have been found in similar experiments repeated many times since the 1960s.

What’s interesting is that while these results are consistent within societies, the degree of obedience differs between countries.

Here, in summary, is the structure of the experiment

An outside volunteer, who doesn’t know the real purpose of this experiment, is recruited to help.

The volunteer is told the experiment will support research into human memory function, and they’re given the role of a ‘teacher’ to another person.

The volunteer is introduced to the ‘subject’ and witnesses them being strapped into a restraining chair and wired up to an electrical circuit!

The volunteer is then taken to another room, out of sight of the ‘subject’, and sat at a desk in front of a control panel of electrical switches, equipped with a microphone and speakers to enable communication with the ‘subject’ in the next room.

The volunteer is then ‘told’ by an expert ‘instructor’ to do the following:

The trick is that both the ‘instructor’ and the ‘subject’ are actors… and, of course, no electric shocks are actually given.

However, the volunteer doesn’t know this.

They believe this to be a genuine experiment, and they hear what sound like real cries of pain (from the subject actor) each time they administer, what they think are real electric shocks.

The experiment continues for a few rounds of questions until, inevitably, the volunteer expresses strong concerns about the pain they’re inflicting – or til they refuse to administer any more shocks.

At this point, the assertive ‘instructor’ actor intervenes and tells the volunteer to carry on – which they do… applying ever-higher voltage shocks to the ‘subject’.

Typically the volunteer will carry on, inflicting pain, until the ‘subject’ is either screaming for mercy or feigns unconsciousness (or death) by going silent.

(if you’re struggling to believe this, look at the video above)

Okay, but what does this have to do with your money?

Well, I’m certainly not suggesting that financial advisers are guilty of torture in this way… but some do torture their clients with boring technical jargon around pensions, tax and investments. But that’s another story 😉

The point here is about how most (ordinary, law-abiding, intelligent) people will follow any instruction from an authority figure.

Many people view their financial or family adviser as an ‘authority’ figure on matters of money. And will quite often follow their instructions without question.

Now, it’s easy to find a ‘confident’ adviser (especially when markets are buoyant) who’s happy to be your authority figure, but it’s unwise to select your adviser on the basis of their confidence.

When dealing with ‘experts’ (of any kind), we need an adult-to-adult relationship; we need to avoid blind obedience because the stakes are often high around your pension and investment planning.

So, instead, we need to engage in the process and get the facts we need to make better decisions.

We need to resist the temptation to jump into those ‘buy now while stocks last’ special offers – and you don’t need to worry about missing out, ‘special deals’ are regularly repeated. Just look at DFS 🙂

So, don’t accept the first idea you’re given; it may not be the best solution for you.

And you don’t want to discover that – after you’ve jumped in.

Take your time, explore the alternatives first and you’ll feel better about your final decision

Regulated financial advisers must give you reasons for their recommendations, and you’re entitled to challenge those reasons.

Indeed, you’ll understand their proposals (and any flaws in them) better when you do.

And if, after all the discussion, you’re still not sure about what you’re being ‘told’ to do…

Unless there’s a very good reason to hurry, hold off for a while.

Long-term investing is exactly what it says on the tin – it’s long term. So, take your time to explore your options for investing your money.

Take some time to talk with (knowledgeable) others about your ideas or those that others are putting to you.

you’ll gain more peace of mind by doing so.

For more ideas to achieve more in your life and make more of your money, sign up to my newsletter.