Home > Achieving more > No one cares how much you know

No one cares how much you know

until they know how much you care 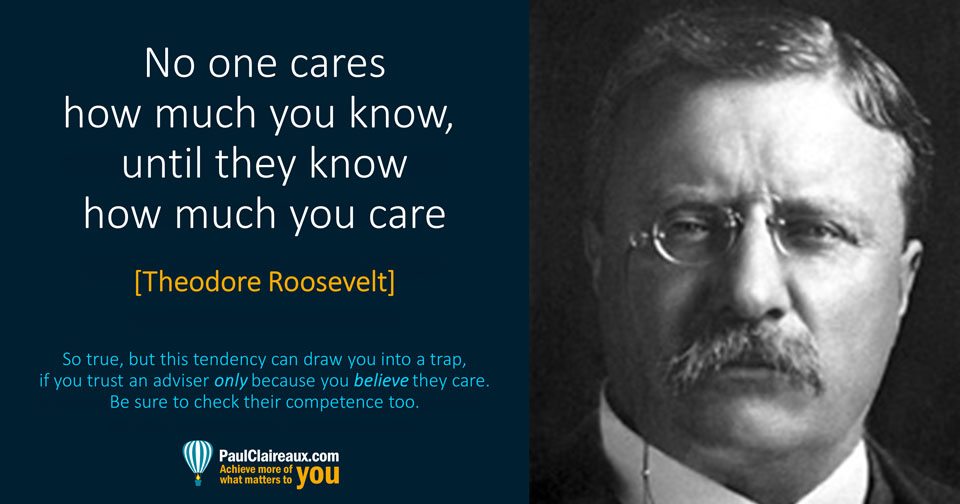 No one cares, how much you know

until they know how much you care

What a truly brilliant insight that is.

It comes from Theodore (Teddy) Roosevelt, U.S. president from 1901 to 1909, and I think some business leaders could learn a lesson from this.

If you want to motivate people to work with you, then you really do have to care about them… but there’s more to this insight than meets the eye.

So, let’s dig a bit deeper.

Why do we listen to idiots?

Few would deny that, until quite recently, hard evidence and science has largely been dismissed by the ‘liberal elite’ (the corporate and political power brokers)

And this issue was wonderfully summed up by government adviser and Chemist, CP Snow here 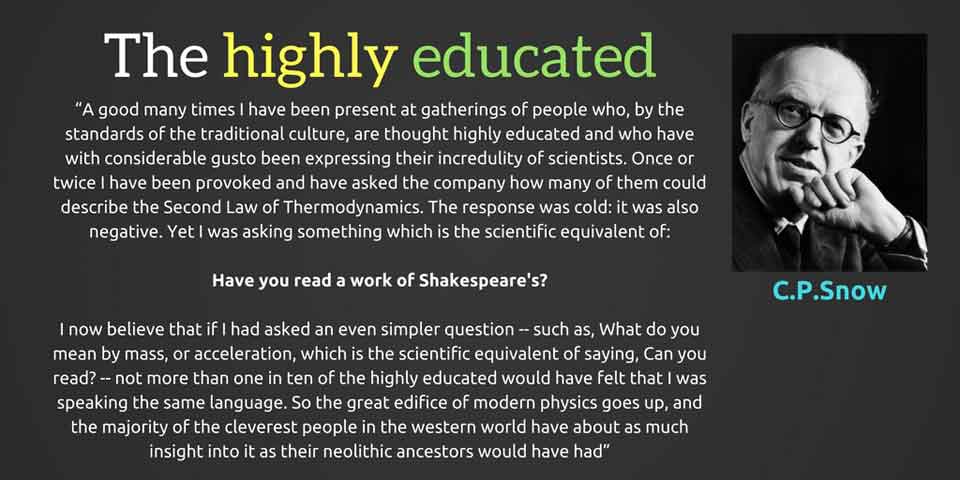 Now, this could partly be because these (generally, Philosophy, Politics and Economics graduate) leaders* have tended to believe that scientists don’t care about the human condition… or at least, not as much as they* do.

After all, it’s social science that these people studied at Uni.

And, without doubt, many believed have believed that the STEM subjects are a separate and cold domain.

It’s all about ‘equations and stuff’ which offers no hope of guidance on morality or human behaviour.

But this is wrong of course, very wrong, and the flaw in this thinking is brilliantly articulated by Sam Harris in this TED talk.

I do hope you’ll watch it.

This is one of the most powerful TED talks you’ll ever see.

The truth is that scientists care deeply about the human condition.

It’s just that some are less socially aware than others. And most are less smooth in conversation than the less scientifically able ‘liberal luvvies’ who are most often put in charge of the ship!

But is this any reason to ignore the valuable information and messages that our scientists deliver?

The trend in public trust

In recent years, public trust has been shifting – and very firmly away from the luvvies (and other ill-informed ideas folk) and onto the minds of the real experts.

The Truth, it seems, is finally about to have its day – more on that here

People the world over are rapidly growing tired of getting ‘alternative facts’ from politicians and social media.

And, if we can get to grips with this issue, we might just manage to identify stupidity before we vote it into power!

The respect we give to those who mislead us

The thing is, there’s a flip side to the scientist’s problem, and it’s a massive problem for society.

In a nutshell, we give way too much respect to those who do not deserve it.

The question is, why we do that?

To my mind, the answer is simple, as Teddy Roosevelt observed.

It’s because we believe that these other people care; that they’re going to look after us in some way; that they’ll ‘make America great again’ or some other such magnificent thing.

So, what’s this got to do with your money?

Well, just think about the misleading marketers who attack your senses every day with a ‘we care about you’ message.

Let’s think about that… do all the companies out there, selling you their ‘stuff’ (from cosmetics to chocolate to gambling accounts) really care about you?

Or is their objective to persuade you to spend a lot of your money today – on stuff you don’t actually need!

So, please, look out for these false ‘caring’ messages!

And is this relevant to your choice of an adviser?

If you choose your adviser (in personal finance, business or marketing) solely on the basis that you believe that they care… you might very well make some expensive mistakes.

If you fail to check on the quality of their advice,

or whether they charge a fair price,

this overly trusting approach could easily cost you

thousands (or tens of thousands) of pounds (dollars) over the years.

So, please take care out there

Watch out for those who want to impress you – with how much they care about you.

Some of these people have nothing of real value to offer you.

And what some offer is downright dangerous to your health and wealth.