Home > Advice to Avoid > Men at work down under

Men at work down under 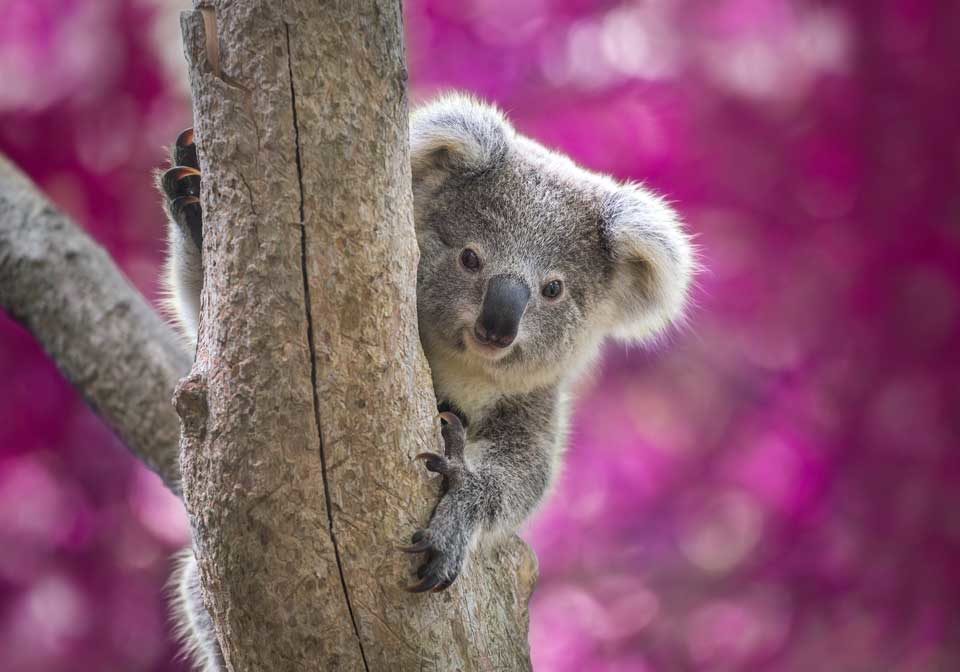 I’ve recently been talking to some young Doctors who are likely to head off to find work down under.

And you can understand why they’d want to do that.

They’ll have the prospect of much higher incomes (without a cap on pay rises either) and they’ll escape from the absurd work levels in the UK.

They’ll also find better weather, warmer seas (albeit that these come with risks of meeting killer fish and killer jelly fish too – check out the box jelly fish) . . .

. . . and the Aussies do produce the occasional decent band.

And property prices are booming there too

But the Aussie economic life is facing some challenges.

So, if you’re thinking of following my friends down there, be careful before you dive into a big property purchase.

As this chart shows, Australia, like us here in the UK, is experiencing a rather big bubble in property prices at the moment. 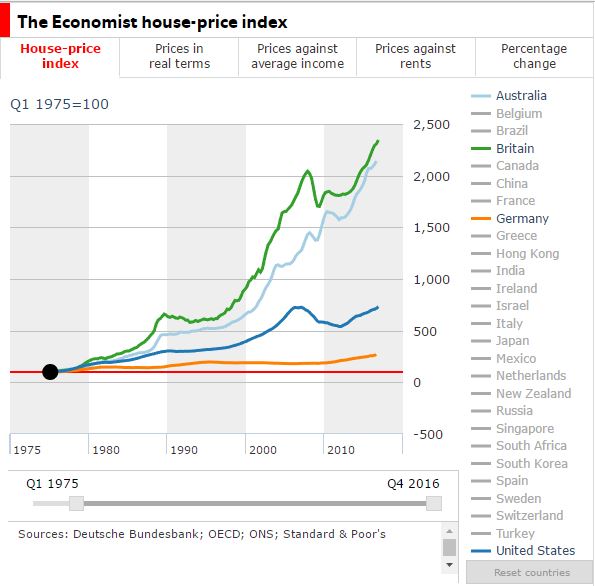 And what they (and we) seem to have forgotten is that there’s really no reason for house prices to go up over the long term . . .

. . . once you’ve adjusted the prices for earnings inflation.

You see, looking at house prices, on their own, tells you nothing about value.

But were they cheap or expensive at that time?

Is that expensive or cheap? 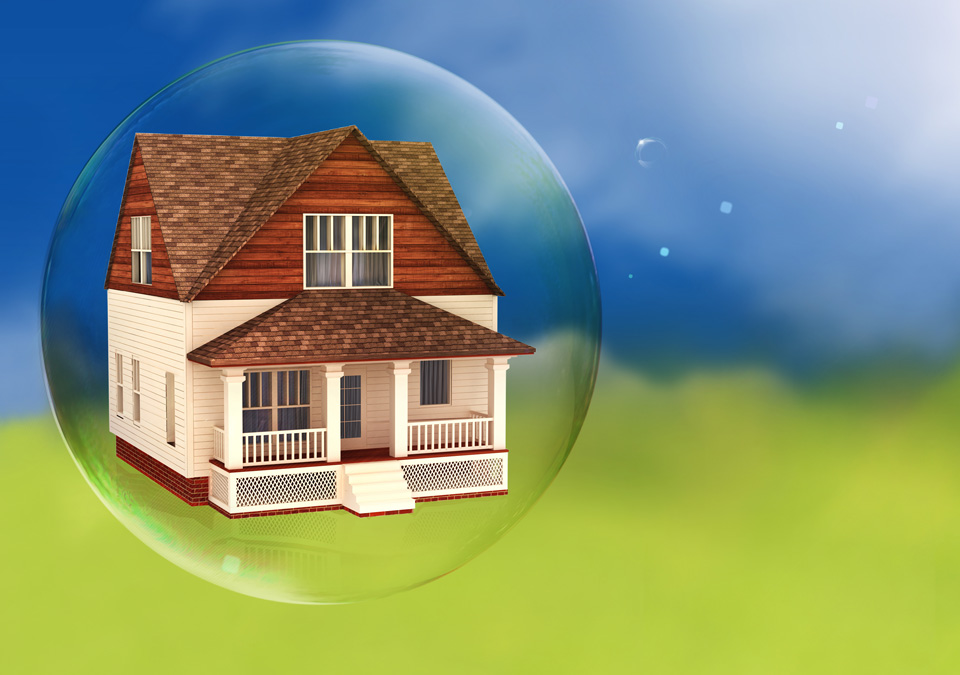 But the truth is  – you can’t tell if you just look at prices.

The prices of ‘real’ assets (like houses and shares in successful companies for that matter) tend to keep pace with inflation over the long term.

So, unless you know how inflation has affected the price – these are just meaningless numbers.

What we do know is that ‘real’ asset prices can also get ahead of themselves (and inflation) from time to time. And when they get over priced, they can fall a very long way.

Asset prices do, normally, revert to some kind of mean value. But reversions can fall right through the mean before bouncing back.

So, it’s useful to have some kind of measure to see if they may be super expensive or cheap (relative their historic norms) at any given time.

With regards to houses, yes they cost a lot less back in 1953, but then people also earned a great deal less than they do today. And this is the key to valuation.

We need to look at prices relative to earnings.

And when we do that with houses in most countries, as I said earlier, they do NOT tend to go up – over the long term.

They simply keep pace with earnings inflation – as we see here in the USA over the past 50 years. 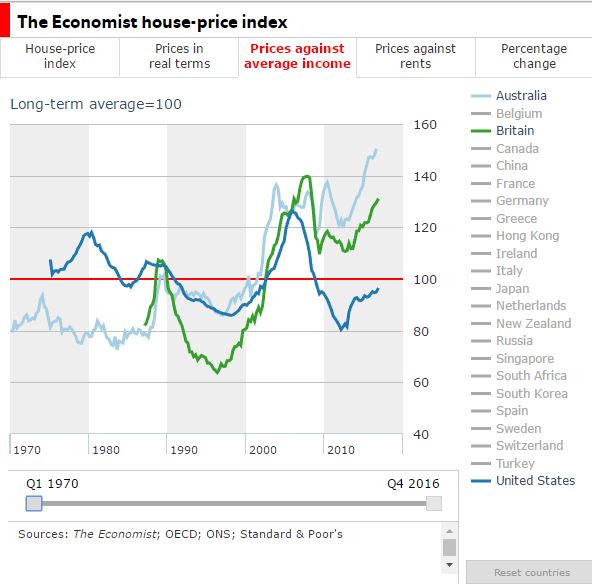 That for 100 years – up until the 1980s– house prices in the USA (in earnings adjusted terms) did NOT rise. 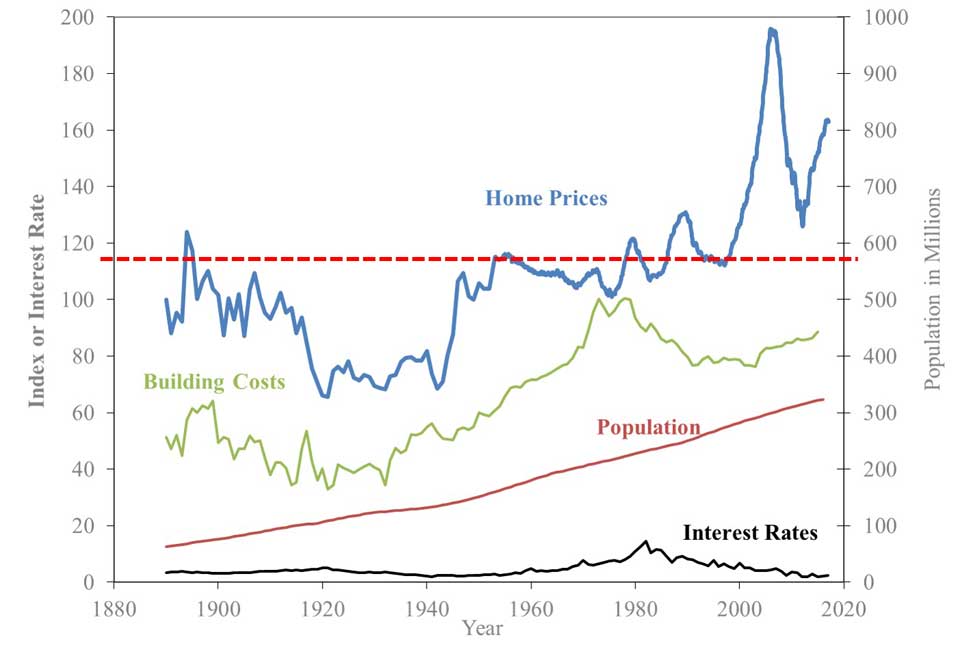 So, why have the prices of houses (and other assets) been booming since the 1980s?

Well, one big factor has been the explosion in the amount of debt over that time.

A lot of this lending has gone into property – because banks like that sort of lending . . .

. . . or rather they did until the global financial crisis in 2008/09 which was triggered by the failure of the very mortgage backed securities that they’d come to love.

Anyway, the banks seem to have regained their taste for property lending in recent years – and especially so in Australia.

And here’s an even better perspective on UK Private Debt over the past 140 years. 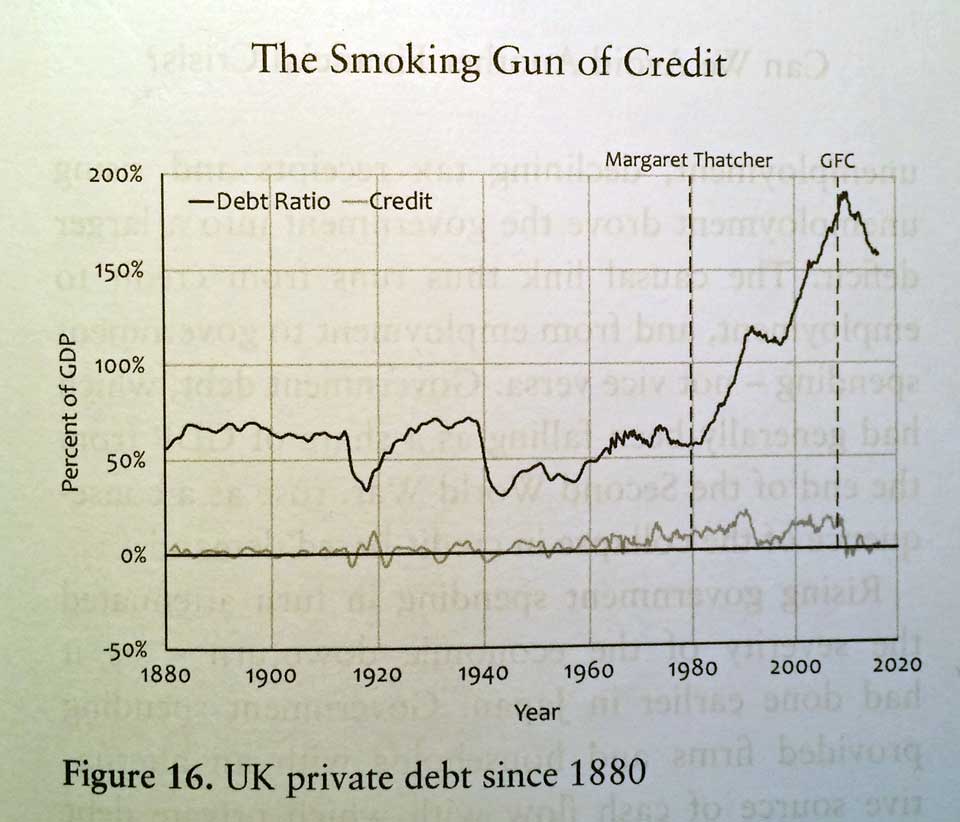 Yes, our debt levels have ‘come off’ a bit recently but no reasonable person would say we’ve solved the problem.

This chart is from Professor Steve Keen’s excellent book, ‘Can we avoid another financial crisis’  which is a must read if you’re interested in these issues.

But what is clear is that a fair bit of the growth we’ve experienced in the past 30 years (in the economy and in house prices) has been an illusion.

It’s come about simply because we’ve been constantly increasing our debts. And that’s not good.

Okay  – so what happens next ?

Well, I’m not entirely sure.

We can see that our governments (of all complexions) and Central banks have allowed debt levels to explode . . .

. . . and they don’t yet have any visible plans to get us out of this hole – and reduce our collective debts to a more sustainable level.

They’re rightly worried that if they encourage us to pay down the debt – they’ll just tip the world into recession. And if and when that happens again – it could be the big one because we’re starting from such high debt levels.

What’s more, I suspect, we’ll have less appetite for bailing out the banks a second time.

If you like straight talking Aussies then you’re going to like listening to Australian economics professor Steve Keen.

He’s Head of Economics, Politics and History. Kingston University London and is one of a small number of economists who really understand this debt problem.

One other person who’s good at explaining these issues in plain English is Lord Adair Turner.

He used to be the head of the Financial Conduct Authority here in the UK – and was handed the job just as Lehman Brothers was collapsing in 2008.

His short talk starts at 2:05 in this video but I’d encourage you to listen to Professor John Kay also.

This is a powerful but short double interview with two of the country’s leading thinkers on the big money issues.

And if that gives you a taste for the subject – here’s an extended talk and interview with Lord Turner at the London School of Economics.

Here he outlines the key themes from his book, ‘Between debt and the devil’

So, is this all sounding a bit scary?

Well, I’m sorry if it is – but these are the financial realities of the world at the moment.

We have way too much debt globally. It’s not going away and something will have to give.

As for the UK and Australian housing markets . . .

Where they go  – in the short term – from here depends on various factors that drive demand and supply. And we can debate those another time.

For now I think we must all accept that houses – and lot of other asset prices have been lifted into the stratosphere by interest rates at 400 year lows. 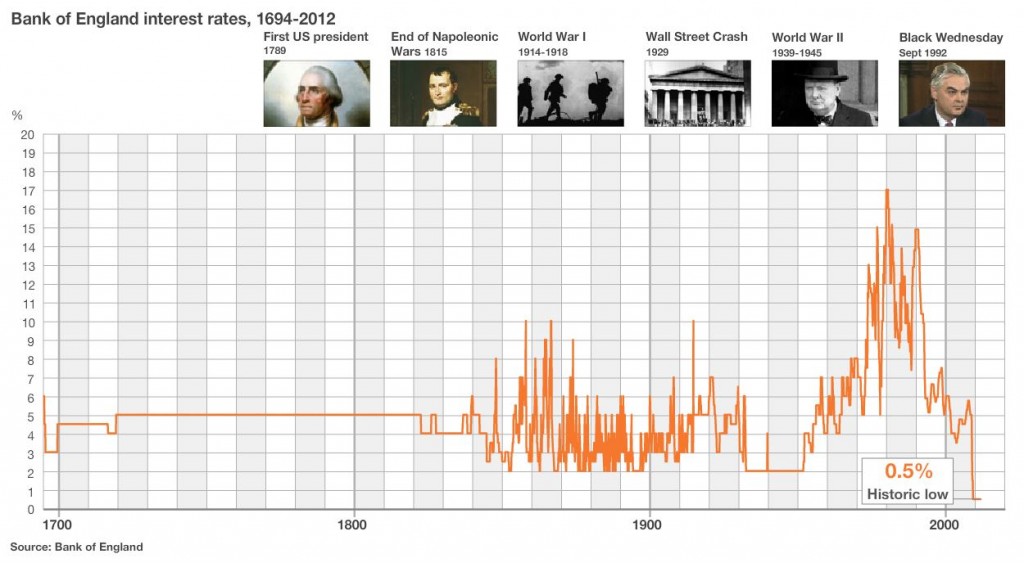 And note that this image was produced before UK rates were lowered to 0.25% p.a.

So, there is clearly a risk, to flip one of many useless but common sense expressions on its head, that:

What goes down – might very well come back up.

And this picture, of inflation and interest rates in the UK since the early 1950s . . .

. . . should give you an idea of just how ‘abnormal’ our current times are. 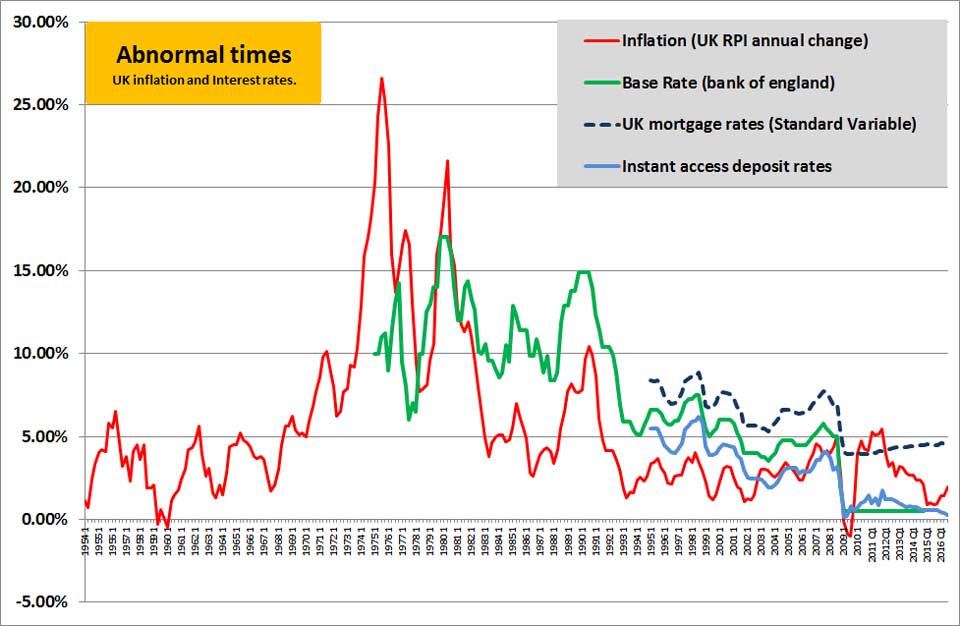 Please don’t assume that interest rates will stay on this floor for the long term.

So take it steady out there